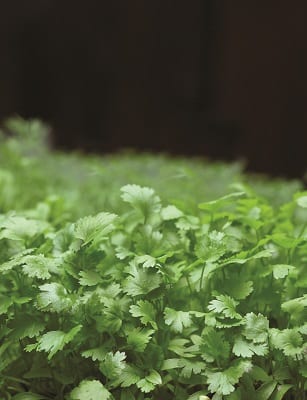 Whether you know it as coriander, cilantro, dahnia or Chinese parsley, Coriandrum sativum is commonly used by cooks across continents and regions. Every part of this short-lived annual herb is used; its leaves, the seed (dried) and its roots. You will find it in dishes prepared in South and Central Asia, including India, the Middle East, the Mediterranean lands and up to Scandinavia, as well as across the oceans to Africa, Mexico and the United States.

Vital statistics
Coriander’s bright green feathery leaves look like Italian parsley and it has similar growth, with a height of 50 cm and spread of 30 cm. Preferring cooler growing conditions, it does best in autumn and spring, tending to bolt into flower in midsummer. It likes full sun, light rich soil and regular watering – growing well with potatoes and anise, but not with fennel.

Quick pick
Pick just before using because the soft leaves wilt quickly. They also lose their aroma when dried or frozen.

Cooking with coriander
Coriander leaves have a pungent aroma but don’t let that put you off. Once you have acquired a taste for its flavour, a new culinary world opens up.

Good to know
The seeds act as a mild sedative and digestive tonic. Put 1/2 -1 teaspoon of seed in a cup of boiling water and steep for 10-l5 minutes. Drink before meals. Chewing the seeds freshens the breath, especially after eating garlic.

Coriander all year round
Vietnamese coriander (Persicaria odorata) is a different species with the same coriander flavour but with a hotter, peppery aftertaste. It is a frost-hardy perennial with low spreading growth. It likes lots of water and consistently moist soil. The leaves withstand longer cooking and combine particularly well with chillies, garlic, ginger and lemon grass.

Taste tip
Coriander doesn’t stand up to heat. Add it at the end of cooking or use it in larger amounts if cooking for longer.

Getting Started With Compost