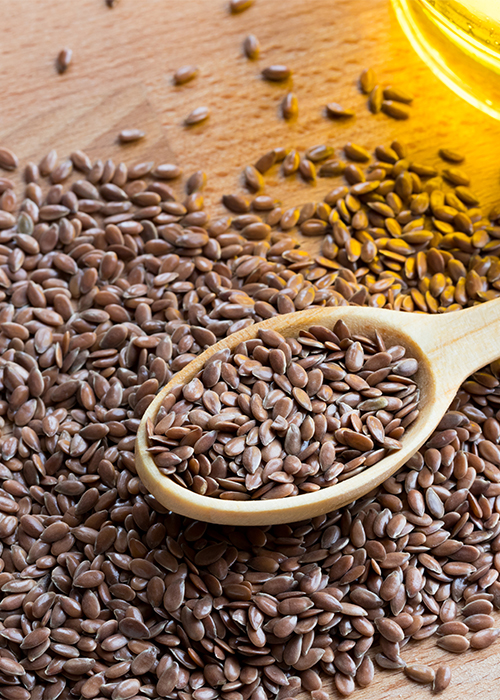 Flax (Linum usitatissimum) also known as linseed, is one of the oldest crops grown commercially. It was initially used for fibre to make linen bedding and clothes. In recent years flax is the health and nutritional benefits of the seed that have made it popular. The best thing? It’s very easy to grow in your own garden.

Each plant produces slender, erect stems about 1m tall with blue or white flowers forming at the end of the stems, the colour depending on the variety. The flowers last less than a day, but each stem produces dozens of flowers that make seedpods. The seedpods swell to the size of a pea and turn from green to golden as the seeds ripen and the plants dry out and die off.

Flax can tolerate a range of soils but will grow best in rich fertile soil that drains well. Position yours in full sun and in a sheltered area away from wind. It grows best in cool weather. Prepare the soil and sow in autumn along with your cool-season crops like peas and brassicas. Frost is not usually a problem for the seedlings and they can tolerate temperatures as low as -2°C.

Prepare the soil in situ by raking the soil to a fine texture. Sow around 1 tablespoon of seed per 3m2 . Mix the seed with flour or mealie meal so that you can scatter evenly over the area. Cover with 1cm of soil, water gently and keep the soil moist until the plants start germinating (about 10 days). The seedlings will form strong root systems and will only need to be watered if the weather is warm, dry or windy. Flax has few insect or disease problems. The only concern is that the slender stalks can be knocked flat by heavy rainfalls or hail.

Weed regularly while the plants are small and be careful not to damage the tiny roots. As the plants get bigger they will choke out any weeds. Feed monthly with a product high in nitrogen.

Harvest seed as it turns a rich golden colour. Lift the plants and hang them upside down with a paper or material bag tied over the seed heads to catch the seeds. After a few weeks, once the stems have become stiff and dry, you may need to beat the bag with a rolling pin to open the seed pods to get the small seeds out. Sieve out the chaff using a colander.

Harvesting the fibre to use in weaving is a bit trickier. The best time to harvest the fibre for fine weaving is before the plants set seed, about three months after planting. If you want both seed and fibre you can still use the now-coarse fibres once the seed has been harvested. The fibre can be used to make baskets or for projects other than fine weaving.

Use the pretty blue flowers in drinks and salads. The seeds need to be ground to release the health benefits and the omega 3 oils. Crush and add to baked goods, muesli, yoghurt, smoothies, salads, soups, stews and casseroles.

You can substitute flax seeds for eggs in baking. Add 1 tablespoon of ground flax seed to 3 tablespoons of water and mix. Let the mixture sit for a minute or two and add as you would an egg. Baked goods will be less airy and chewy than if using eggs, but is a vegan alternative for muffins, cakes and pancakes.

With its high fat content, flax seed can also replace fat in some recipes. Replace 75g of butter or oil with 1 cup (250ml) ground flax seed. In baked goods it tends to make the crumb denser and it browns quicker.

There are many benefits of flax seed in your diet. They are rich in fibre and a good source of omega 3 oils. They are also by far the richest whole food source of alpha-linolenic acid (ALA) fatty acids, which are mainly used by the body for energy. 1 tablespoon of flax seeds contains 2338mg of omega 3, and 1 tablespoon of flax oil a whopping 7196mg, which is why the oil is often used as a supplement.

There is no official recommended daily allowance of omega 3. However, most experts agree that 250 – 500mg per day is enough to maintain health. There is also no agreement on whether it is possible to take too much omega 3: some say that 3000 – 5000mg per day is okay while others disagree.

It is said to help with a variety of health concerns. These include reducing the symptoms of depression and anxiety. As well as reducing the risk of certain cancers. It is beneficial for heart health (although again, there are studies that disprove this theory). It can also be beneficial in treating both diabetes and liver disease.

Learn how to make a chickpea burger. Use flax instead of eggs for a vegan option.