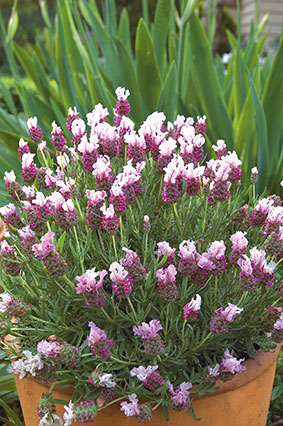 Their fragrance and range of flower colours, from lilac to deep purple, pink and blue, make lavender irresistible to most gardeners, while many pesky insects, including aphids, are repelled by the aromatic perfume that characterises these plants.
This insect-repelling ability means that lavender is a perfect companion for ‘juicier’ plants, such as vegetables, herbs and roses.
The sheer number of lavender species and hybrids is quite astounding (even the experts sometimes have trouble with the nomenclature and origins of some of them) and every year new varieties are introduced.
While some of the new ones prove to be average performers, others are absolute winners. Two series, both of Italian parentage, that made it to the top of our list are Lavandula pedunculata ‘Lace’ and L. pedunculata ‘Ruffles’. Lavenders in the ‘Lace’ series are early-blooming, with a compact growth pattern and aromatic grey foliage. Those in the ‘Ruffles’ series produce stunning flowers, predominantly in shades of pink.
These ranges were developed in Australia, so that they would acclimatise and adapt to the conditions in the southern hemisphere, and they are indeed resistant to the heat and humidity of some of our regions. Interestingly, some top South African growers have reported that experimental cultivars have started blooming as early as June, and in morning temperatures of – 4 °C.
There are also many other lavenders that are quite at home in local gardens and have thus become best sellers. The secret is to select the varieties that will provide pleasure all year round and are problem free. Apart from the simple beauty of a single lavender planted among other plants, there are many other ways to use lavenders in the garden. A mass planting can be used to form a lovely hedge around a vegetable, herb or rose garden, and they look spectacular under standards. Planted in dense rows along the sunny pathway to your front door, they are sure to be enchanting.
Lavenders appreciate warm and dry conditions so they can be used between other perennials and herbaceous plants that have the same growing requirements, which is ideal in a small garden.

When do Lavender flower?

The ‘Ruffles’ and ‘Lace’ series flower from early winter right into spring just like varieties of the Spanish lavender, but there are other sought-after species, such as the French and English lavenders, that provide colour all year round.

Most suitable climate for Lavender

Lavender generally prefers warm and dry conditions and may experience problems in humid, subtropical regions. Most species are relatively hardened against cold, can withstand light but not heavy frost, and are wind-resistant in coastal areas. Lavender flourishes in the Mediterranean climate of the Western Cape.

How to grow Lavender

Location: full sun.
Soil: sandy to loamy soil that drains very well is essential – lavender hates wet feet. If you are dealing with heavy clay soil, work in really generous quantities of river sand and coarse compost to improve the structure. Built-up flower beds could also be considered, because this will also help improve soil drainage.
Water: lavenders don’t want too much water and can even endure long periods of drought. Only irrigate when the soil has dried out – don’t water a little bit every day.
Pruning and fertilizing: regular light pruning after the blooming season encourages another flowering phase and keeps the plants neat and the foliage dense. Shaping the plants so that each gains maximum exposure to light prevents sparse growth at the base. Don’t prune too heavily and don’t cut back to old wood with no leaves – this will kill the plant. Sprinkle a handful of slowrelease fertilizer that is rich in potassium around the plants after each pruning session and irrigate well immediately thereafter.
Good to know
* Lavender plants need to be replaced every four to six years, when they become very woody and flower quite sparsely.
* If you have limited garden space or the soil isn’t suitable, plant your lavender in pots with a quality potting soil mixture.
* Lavender must spend most of its day in the sun.
* Lavender grows naturally in poor, sandy soil that tends to be alkaline. If your soil is acidic (low pH), add a handful of agricultural lime during planting, or sprinkle it around the plants later if they appear to be struggling.
In a nutshell
* Sandy, well-drained soil.
* Full sun all day.
* Water-wise and exceptionally prolific.
* Replace every few years with fresh plants.
* Suitable for the garden and pots.
* Pleasant fragrance for humans, but repels insects such as aphids and thus good for companion planting.
A visit to the gardens earlier this year highlighted MANY different ways of using lavender.
Lavender never seems to lose its allure. Besides all its qualities as a healing, soothing and fragrant herb, lavender is a landscaper’s dream. It always stands out, whether it is used in formal or informal gardens, planted en masse, in containers or in combination with other plants.
Herb grower Louis van Aswegen has created some inspired herb gardens using different varieties of lavender at Doonholm Herb Farm in Midrand. A lavender lane incorporates 15 different varieties of lavender and swathes of lavender are included in the sensory spiral garden alongside other fragrant plants. Lavender also features in a modern container garden, a monastic cloister garden, and in the organic vegetable gardens as an insect repelling companion plant. These extensive herb gardens go on show in April as part of the Herb Happening arranged by the Herb Association of South Africa.
1 The lavenders that make up this lavender lane are (from front to back) Grosso, stoechas and Margaret Roberts. This idea can be scaled down for small spaces, such as alongside a pathway, a wall or under windows. For interest combine different kinds of lavender, with taller lavender at the back and shorter varieties in front. Dutch lavender (LAVANDULA allardii) and Spica (Lavandula x allardii ‘African Pride’) are excellent hedge lavenders. Both have silvery grey leaves and don’t flower prolifically, so are ideal for clipping.
2 For a lively effect use lavender as a contrast for yellow and orange flowers, such as daylilies and LEONOTIS leonurus (wild dagga). This colour combination works well because blue-mauve is directly opposite yellow and orange on the colour wheel and when the two opposites are used together they enhance each other.
Lavender is drought tolerant and combines well with indigenous drought tolerant flowers, which is yet another reason to plant it with Leonotis. Other indigenous plants with similar water requirements include agapanthus and wild garlic (Tulbaghia spp.).
3 Silver, white and blue with deeper hints of purple make a lovely colour scheme. Lavender can be combined with other silver foliageplants such as stachys, wild garlic, helichrysum, artichoke and various Artemisia species. Offset the silver with white flowering plants (try ‘Iceberg’ roses, agapanthus, feverfew, and daisies), blue (agapanthus, catmint, Russian sage) and hints of purple (mallow) for a garden with a depth of colour that is cool in the day and sparkles at night.
4 The texture of lavender is another of its great assets. This is particularly useful when putting together combinations of plants for a gravel garden, as colour, shape and texture are very important in such a setting. Gravel gardens are a beautiful alternative to lawn or other ground covers and not only conserve water but are low maintenance. The central feature of a gravel garden is the garden path and lavender is an excellent choice for planting along the pathway.
What lavender needs
The basic requirements for all types of lavender are plenty of sun and soil that drains well. The drainage in heavier soils can be improved by adding compost and also palm peat, which comes in brick form and swells to five times its size with the addition of water.
Lavender also does well in containers and this is the best alternative if the garden soil tends towards clay. Use potting soil that drains well, and water and feed regularly. Lavender in containers can take semi-shade conditions.
Trim lavender after it has flowered to prevent the bushes from getting woody and be prepared to replace lavender bushes after two or three years. (This seems to be unavoidable on the Highveld as the bushes tend to lose their vigour.)
Depending on the variety, space lavenders fairly widely apart so that there is room for them to grow and for the air to circulate. Lavender planted too close together can become susceptible to infection by fungus.

Dutch lavender (L. allardii) is tall growing (80cm) with grey-green slightly serrated foliage. It is spectacular en masse and is ideal for hedging as it does not flower prolifically.
Spica (Lavandula x allardii ‘African Pride’) also grows up to 80cm and has a grey, slightly serrated leaf similar to L. angustifolia. It is ideal for contrast planting and hedges and is useful for its foliage rather than its flowers.
French lavender (L. stoechas) grows to a medium height (60 cm), has very aromatic grey leaves and large purple flowers topped with pale purple bracts. The main flower flushes are in spring and again in autumn; when in flower it is truly showy.
Kew (variety of L. stoechas) is a tall growing lavender (up to 80 cm) with narrow grey leaves and large purple flowers.
Margaret Roberts (Lavandula x intermedia var. Margaret Roberts) is one of the most popular landscape lavenders that looks good planted en masse as well as in containers. It grows in to a large bush 75 cm high and has fine aromatic grey leaves and small blue flowers that are borne on long stems. It flowers off and on throughout the summer and just needs trimming after flowering because it doesn’t become woody