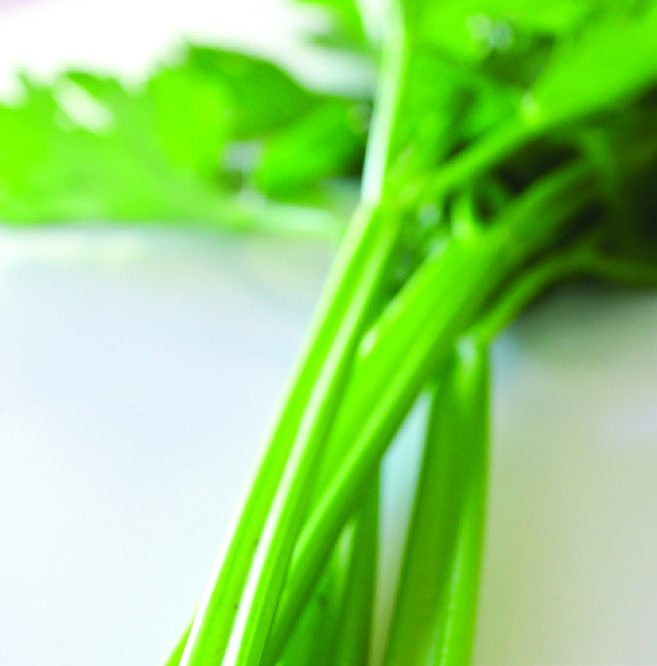 Apium graveolens – is it a herb or a vegetable? Whichever way you view it, celery has been grown for its nutritional and medicinal properties for at least 3000 years. All you need is a row of plants, perhaps even in containers, to have a constant supply of crunchy green stems for salads, juicing or adding to slow-cooked stews and soups.

Growing
The secret of good celery is to produce ‘soft’ stems, which are more edible, with a milder taste and crunchier yet juicy texture. If celery stems are tough and thin it could be the variety, but is more likely to be the result of insufficient water, lack of food or too much sun. Celery grows best in morning sun, in moist, fertile soil that has been well composted. It can also be grown in containers in well-enriched potting soil. Water regularly and mulch; the soil should not dry out, especially in containers. Fertilise twice a month (or weekly at half strength) with a nitrogenrich liquid feed.

Seed sowing tips
Sow seed into trays and cover until plants germinate, within 10 – 20 days. When seedlings show three true leaves, transplant into individual pots or directly into beds. This severs the tap root, which encourages the development of a better root system. Set plants out a little deeper than they were in the seedling tray, but don’t cover the growing point.

Companion planting
Grow celery with other edible plants that have the same water, light and nutrition requirements, such as cabbage, beans, leeks, lettuce, spring onions, spinach and tomatoes. Celery improves the health and flavour of cabbages in particular, and repels white cabbage butterfly.

Harvesting celery
The easiest way to eat celery is to harvest the outer stems when you feel they are thick enough to eat. Alternatively, harvest the whole plant when it is mature by forking it out of the ground.

Getting Started With Compost