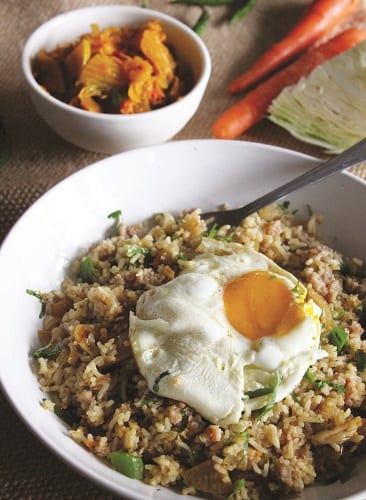 Kimchi, South Korea’s national dish, was developed in the days before refrigeration, to best make use of seasonal crops. Today there are over 180 different variations on kimchi and it is served with almost every meal in Korean households. Essentially, kimchi is a fermented, spicy cabbage dish, but what makes it special is the sour, spicy taste that goes well with rice or noodles and other veggies for the vegetarian option, as well as with meat dishes like Korean barbeque, soups and stews. It’s also said to be one of the healthiest foods you can eat, containing loads of vitamins A, B and C, as well as a healthy bacteria called lactobacilli, which aids digestion and is added by the fermentation process. Also thanks to the fermentation process, kimchi can be stored for months, the flavour continuing to develop, with the optimum flavour at around six months. All in all, kimchi is a great way to use up and preserve a glut of cabbage and other vegetables. Kimchi is usually based on cabbage, but can also be made with radishes, mustard greens, cucumbers, carrots, onions, all depending on what’s in season and the traditional recipes from various regions. The spiciness comes from ingredients like garlic, chillies, ginger and fish sauce.

This is a basic recipe to which things like kale, beets, radishes, seaweed, horseradishes or cucumber can be added.

Prepare jars for packing by sterilising with boiling water. Add the vegetables to a mixing bowl and add salt. It should be salty but not overwhelmingly so. Add the spices and mix well. Pack the mixture into the jars and press down. Mix the water, apple cider vinegar and honey together and pour over the vegetables, making sure they are completely covered. Place a piece of wax or parchment paper over the jar to stop the metal in the lid from touching the veggies and tighten the lids. Store in a cool dark place. Kimchi can be eaten after about two days, and it will develop more flavour and sourness over time. Store in the fridge after opening.