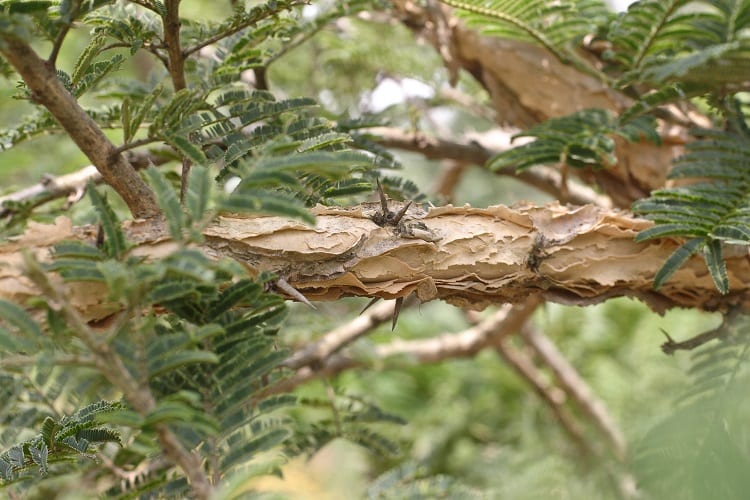 Acacia trees are an iconic symbol of the African landscape. Here in South Africa the paperbark thorn is amongst the most common and easily recognised of the flat tops. It grows in natural abundance in the eastern regions of the country, from KwaZulu-Natal, northwards to Zimbabwe and westwards to the northern reaches of Botswana and Namibia. There are three different subspecies of this tree found in Africa, with only Acacia Sieberiana var. Woodii occurring south of the Zambezi River.

Whilst these magnificent trees have always been admired for their majestic flat-crowned shape and distinctive beauty in their indigenous habitat, they have only in the last few decades really become an integral part of the garden landscape. They are relatively quick growing, and can reach a height of 17 metres, with an equally wide, flattish spread in ideal conditions.

They are clothed in fine, feathery, twice-compound leaves of rich green that contrast strikingly with their light brown to grey-yellow cork bark. The bark often flakes off in papery strips; a characteristic that gave rise to the tree’s common name. Conspicuous white thorns up to 9 cm long are held in pairs on some specimens and yet are absent on others.

Scented, creamy-white, ball-shaped flowers arrive in profusion during spring (September to November), followed by smooth, woody seed pods that shed in the autumn. The pods are eaten by game and cattle, although it is believed that they can taint the milk of cows that have devoured them. The stems sometimes exude a sticky gum that is edible.

Acacia flowers attract a wide array of insects to the trees; these in turn lure a range of insect-eating birds into the vast canopies. Wood Hoopoes and Woodpeckers forage in the soft flaky bark whilst certain birds, like pied and crested Barbets, utilise the stems for nesting holes. Paperbark Acacias certainly attract a broad spectrum of interesting wildlife to the suburban garden.

As garden subjects they develop into stately specimen trees that offer umbrella- like shade in summer and, being deciduous, allow filtered sunshine through the canopy of branches during winter. Ornamental plantings of groups of trees growing relatively close together make a spectacular feature in larger gardens.

Some Acacia trees develop with multiple stems, lending a unique aspect to the landscape. These Acacias are often planted in parks and large property developments in spite of the fact that they can shed the odd thorn. They are tough, relatively cold and frost tolerant, and extremely drought resistant, so these typically African thorn trees are sure to be utilised more and more in suburban landscapes.