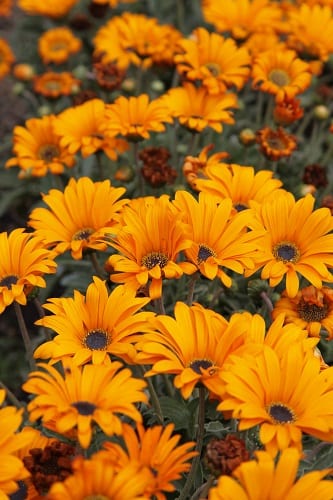 Arctotis is a fairly large genus of about sixty species within the daisy family Asteraceae.

Distribution and Habitat of Arctotis

This genus is endemic to the southern African countries of Botswana, Lesotho, Namibia and South Africa, and extends to Angola in southern tropical Africa.

Arctotis acaulis (African daisy or Gousblom) is native to the western and northern Cape from Nieuwoudtville and Calvinia to Swellendam, and occurs on flats and lower hill slopes, mainly in Renosterveld.

Arctotis stoechadifolia (Silver Arctotis or Kusgousblom)  is probably our most well-known perennial Arctotis and is anomalous in that, despite its restricted wild distribution on sand dunes and flats along the west coast between Yzerfontein and the Cape Peninsula, it has naturalised so successfully in coastal California and parts of Australia that it is threatening the local vegetation there and is regarded as a noxious weed.

Arctotis species are also represented in all the other provinces, however they do not thrive in mistbelt areas during the rainy months.

Arctotis offers the gardener a variety of growth forms, including tufted annuals, perennial trailing ground covers, sprawling shrublets and semi-woody shrubs. It is a wise choice for sunny rock garden pockets, difficult seaside gardens, mass bedding displays, as a cascade over retaining walls, stabilising steep banks, planted in pavement beds and traffic islands, and certain species can even be used to brighten up sunny window boxes and courtyard containers.

The flower heads consist of central clusters of dark disc florets that contain the stamens and stigmas, surrounded by the colourful ray florets that vary in shades of white, cream, yellow, orange, red, maroon, pink, mauve and purple. The leaves are somewhat sticky and very variable in shape, often with wavy margins, and usually have hairy upper surfaces with a white woolly covering below, emitting an invigorating acrid smell when bruised. The flowers only open fully in bright sunlight, remaining closed in cold or rainy weather.

The plants are distinctive in that they have no aerial main stem but, instead, several branches that arise directly from a persistent rootstock. The plant forms a neat small bush up to 30cm high and produces an abundance of solitary large flower heads on long flower stalks from late July to early November, in shades of white, bright yellow, orange, pink or mauve. It is suited to acid or alkaline, granitic, sandy or clay soils and is seen to best advantage in deep window boxes, rock garden pockets or in mass displays, or planted in containers in sunny courtyards.

This is a mat-forming groundcover with long horizontal stems producing silvery leaves and light to bright yellow flower heads from early September to mid-December, with reddish undersides and black centres. The trailing stems root wherever a stem node touches the ground, and propagation is easily achieved simply by uprooting and dividing lengths of rooted stem.