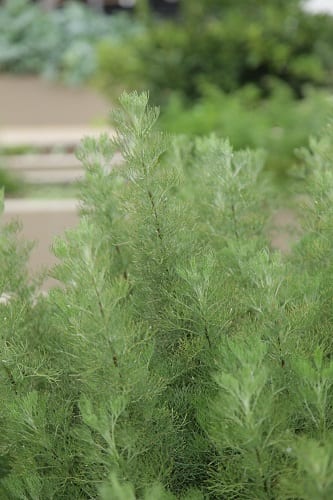 Wild Wormwood is a highly aromatic, many-branched and bushy upright perennial shrub. Artemisia Afra can grow up to two metres in height and has attractive, soft and feathery leaves that are grey-green in colour and resemble fern fronds. Panicles of inconspicuous pale yellow, drooping flowers are borne at the ends of branches.

It occurs throughout South Africa, dies back in colder regions during winter and quickly re-sprouts in spring. The best crop of foliage is achieved by regular pruning. Wildeals, the vernacular Afrikaans name by which the plant has been known since colonial times, is derived from the Dutch word alsem, used in Holland to describe the European species Artemisea Absinthium. Artemisia Absinthium is also used for medicinal purposes.

Artemisia Afra is undoubtedly one of the oldest and most valuable medicinal shrubs in South Africa. It was, and still is, widely used throughout the country for a variety of ailments. Traditionally an infusion or decoction of Artemisia Afra, mixed with honey or sugar to form a syrup, is highly regarded as a treatment for colds, flu, sore throats and bronchial and respiratory conditions like pneumonia, asthma, whooping cough, croup, bronchitis and coughs. The steam from leaves boiled in water is inhaled to relieve the symptoms of these ailments, and the vapour from a hot infusion is used to steam the throat of scarlet fever patients.

Other uses include (or included)

–   Infusions or decoctions of fresh or dried leaves and young twigs are taken for gastric problems such as a weak stomach, indigestion, constipation, flatulence, loss of appetite and to expel intestinal worms, while a brandy tincture is taken orally for colic.
–   An infusion or decoction is used to bathe the eyes; as an antiseptic to bathe and cleanse wounds; as a lotion to bathe haemorrhoids and in a hot bath to bring out the rash in measles. Fresh twigs in a bath will relieve itching.
–   Fresh tips of young twigs are inserted into the nostrils for colds; to clear a blocked nose and to relieve headaches and a twig put onto the affected tooth relieves tooth ache.
–   Infusions or decoctions are taken for relief from gout, rheumatism, high blood pressure and nervous conditions. Fresh leaves, sprinkled with buchu vinegar and bound on the heart, were used to bring down fever.
–   A poultice made from fresh leaves and placed on the affected area was believed to relieve neuralgia and the swelling in mumps.
–   For sweating feet, fresh or smoked leaves were placed in shoes.