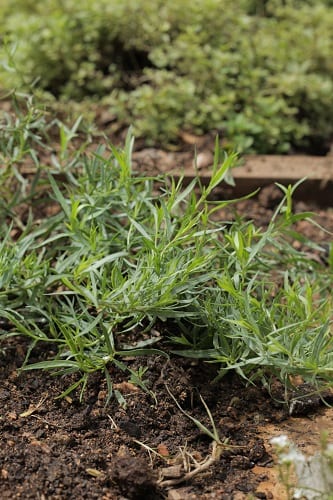 Artemisia Dracunculus, or French tarragon, is a frost-hardy perennial with narrow green leaves. It becomes dormant in winter but comes back to life in spring.

The plant grows to about 40cm in height and width. It should be replanted every few years as the plant loses its vigour over time. It is normally purchased as a young plant (propagated by division or from cuttings) as it is virtually impossible to obtain viable seed.

Artemisia dracunculus (French Tarragon) is not to be confused with A. dracunculoides (Russian tarragon), a variety that is grown from seed and that has a bitter taste and lacks the aromatic oils of the French variety.

Use the anise flavour of French tarragon to complement food such as eggs, chicken, fish and veal, as well as vegetables, potatoes, stuffed tomatoes, rice dishes and avocado fillings. Tarragon is also used to flavour sauces such as Béarnaise and tartar sauce, and combines well with chervil, parsley and chives as fines herbes.

Tarragon vinegar, which is used in salad dressings and marinades, is made by steeping the fresh herbs in white wine vinegar. The versatility of tarragon doesn’t end there because it can also be incorporated into butters, hot or cold soups and mustards.

Artemisia Dracunculus will thrive in deeply dug, well composted soil in full sun and does well with a deep weekly watering (twice a week in very hot weather). It sends up plumes of delicious branches that can be cut frequently. It will die down in winter and by late winter you should cut any remaining branches back to ground level and then cover the area with compost and water well. Tiny, succulent buds of new growth will soon appear as the weather warms. This is the time to carefully dig out the edges of the clump using a sharp spade, and plant them elsewhere in moist, well composted soil. This ‘early spring root division’ is the sole means of sure propagation. Cuttings taken from the branches during the summer are far more difficult to establish.