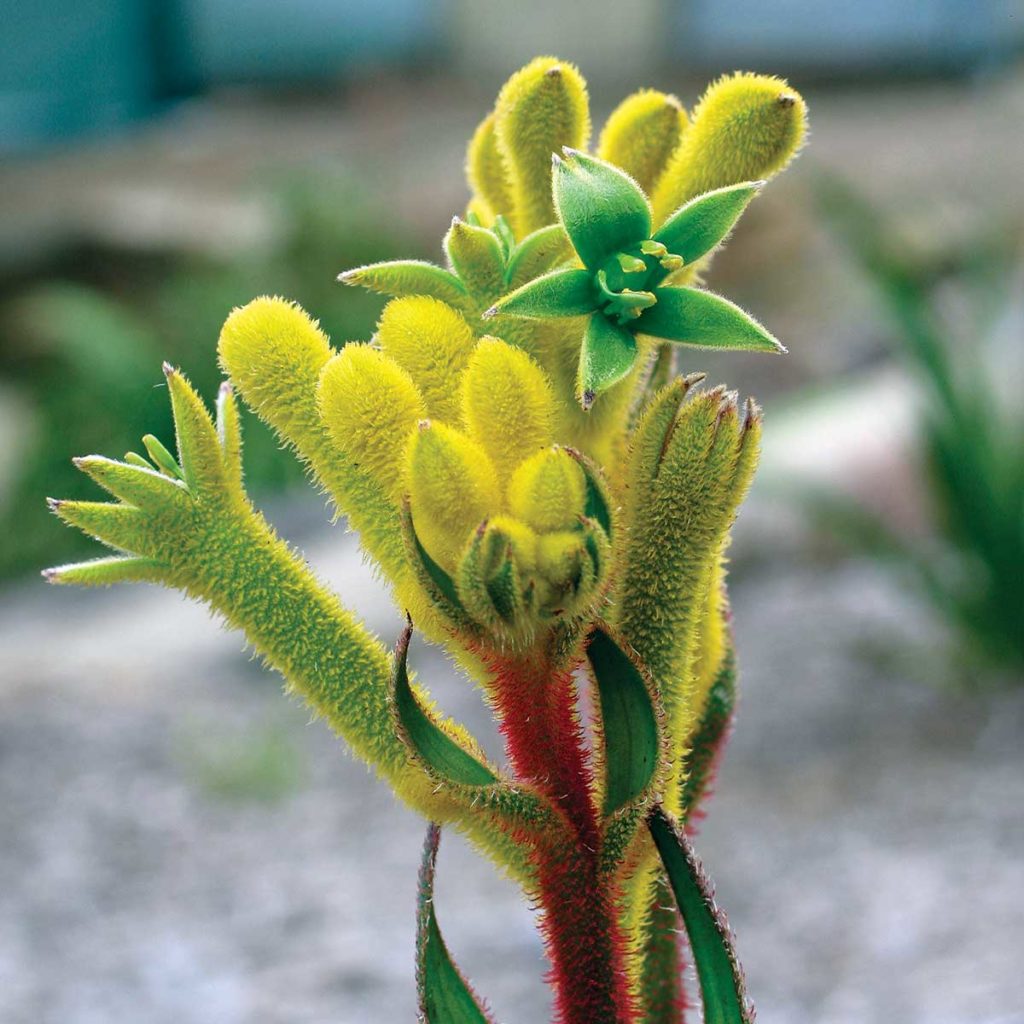 Fill up your low-water zones like the gravel garden, rock garden and sunny low maintenance areas with new and very cute Anigozanthos varieties, also known as kangaroo or cat’s paws.

These weird and wonderful evergreen perennials, which flower for months on end, originated from the crossing of two Australian species to get a large range of dwarf cultivars (50 – 60cm x 45cm) with big flower power in a wide array of bright colours. Underground horizontal rhizomes give life to clumps of tough, sword-like green leaves with fans of leafless stalks topped by racemes of tubular two-lipped blooms. Both stalks and flowers are covered in colourful woolly hairs, giving them a velvety touch.

Maturing flowers flare open at their tips into six greenish petals resembling a small paw. The flowers are long-lasting on the plant as well as in a vase and are very popular as commercially grown cut flowers. Garden plants will flower virtually all year long if given the right growing conditions:

Climate: Temperate with low humidity. Kangaroo paws will tolerate light frost and cold but might temporarily be put back by it. They soon sprout again in warmer weather.

Soil: They prefer dry, nutrient-poor, sandy soil that drains very well. You should add compost to the planting holes, but steer clear of root fertilisers with a high phosphorus content. Growing plants only need fertilising with a balanced slow-release organic product in spring.

Water: Established plants only need occasional watering, which should preferably be at soil level and not overhead as this can cause rotting. They will need regular watering at the bud-setting stage though.

Grooming: Cut off the old flowering fans after a flowering period and also remove old leaves to stimulate the rhizome into producing fresh growth.

Kangaroo paws are pretty on their own when planted in numbers, but also combine well with gaillardias (blanket flower), Senecio mandraliscae (chalksticks), Carex ‘Frosted Curls’, fountain grasses, verbenas and scaevolas – all good for softening up a gravel patch.