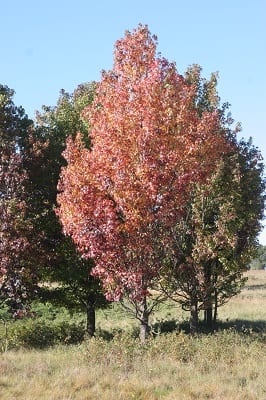 This is a selected, variegated leaf form of the Liquidambar, which originates from parts of the Eastern United States and Mexico. The deciduous Liquidambar, which is known by the common name of ‘Sweet Gum’, has been cultivated as an ornamental garden tree all around the world, primarily for its colourful autumn foliage and neat, upright growth habit.

Liquidambar Styraciflua ‘Variegata’ is adorned with attractive five- to seven-lobed leaves that are pale grey-green with a cream margin. Some leaves are almost mottled or blotched with no distinctive variegation. Even the bark on the young growth is variegated. Insignificant yellow to green flowers are produced in spring.

The female flowers produce spherical fruit clusters with spiny outer extremities. They look like little hedgehogs and the often foliage form of this Liquidambar can attain a mature height of almost 25 metres, while this variegated form probably reaches 10 to 12 metres.

It normally has a tidy conical form, making it a statuesque specimen tree for parks, gardens and street plantings. Liquidambars grow best in deep, rich soils and can even be grown in swampy ground. They grow reasonably quickly and benefit from regular applications of general garden fertiliser through the growing season.

Trees can be kept smaller in stature by being subjected to a light pruning in winter. ‘Variegata’ is propagated by grafting a variegated plant onto the root stock of a green-foliage seedling. Any growth emerging from the root stock must be removed as soon as it appears to ensure that it does not become dominant and eventually take over completely.

Liquidamber Styraciflua ‘Variegata’ is a magnificent specimen tree that is certain to find pride of place in the hearts of many discerning gardeners, especially in the colder regions of South Africa.