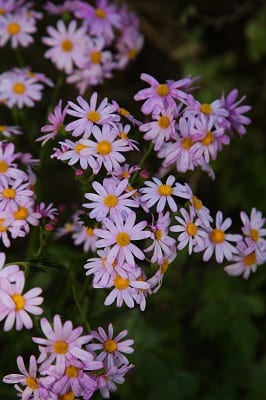 Senecio is a member of the Asteraceae (daisy) family, which is the second largest family of flowering plants (with about 23000 species) after the Orchidaceae. Senecio has a cosmopolitan distribution and includes more than 1000 species of annuals, perennials, succulents, climbers, aquatic plants, shrubs and small trees.

Senecio Elegans is a beautiful spring- and early summer-flowering annual, which grows up to 60 cm high. It was first described by the Swedish botanist Carolus Linnaeus in 1753. It is endemic to coastal regions from Saldanha Bay in the Western Cape to Port Elizabeth in the Eastern Cape, and grows in colonies on dunes.

The long-lasting flower heads are borne in dense clusters and the outer ray florets vary through shades of pink, mauve or purple, or are occasionally pure white with yellow, central disc florets. The stems are smooth or slightly to densely hairy, and the fleshy leaves are deeply divided with inwardly-curled margins and covered with glandular hairs.

Senecio Elegans flowers from September to November. Autumn is the time to sow seeds of indigenous spring-flowering annuals, with April and May being the best months to sow Senecio Elegans. Sow the fluffy, white seeds in seed trays or directly into garden beds in a sunny position. Germination of fresh seeds occurs within two weeks, and seedlings can be thinned out or replanted from seed trays after 6– 8 weeks.

Senecio Elegans will grow in any well-drained soil. It is an ideal water-wise plant for frost-free rock garden pockets in windy seaside gardens, pavement beds, borders and containers. It puts on an excellent show when displayed in mixed plantings with other mid-to late spring-flowering annuals like the yellow Grootstinkruid, Oncosiphon Grandiflorum and the parachute daisy Ursinia Speciosa.

Senecio Elegans is often confused with the annual Senecio Arenarius, which has similar mauve or white ray florets and yellow disc florets. The latter species, however, differs in that its ray florets point downwards and it is a shorter plant reaching 40 cm high, with a much wider, inland distribution from southern Namibia and the Western Karoo through to the De Hoop Nature Reserve in the Southern Cape.

Senecio Elegans has become naturalised in coastal parts of California, Southern Australia, New Zealand and the Azores, but is not weedy in South Africa. The flowers of Senecio Elegans attract honey bees to the garden, and its seeds are relished by Cape Canaries.