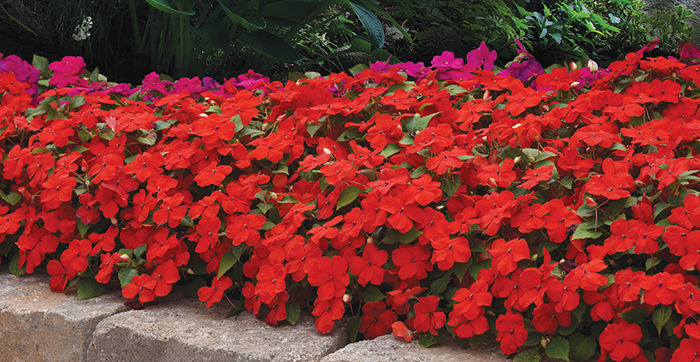 Welcome back summer’s best-loved flowers for shade. The fast-filling bedding Impatiens Walleriana, which all but vanished from summer shade gardens, is back, and without the risk of dying from downy mildew.

Intensive breeding efforts and collaboration between international seed breeders has produced two new varieties that are highly resistant to downy mildew. Like the original Busy Lizzies, they flower from spring into winter, need no special care, and provide a swathe of colour in shady beds.

The new varieties are ‘Beacon’ and ‘Imara’. Both have gone through extensive trials overseas as well as in South Africa. ‘Beacon’ has so far proved to be the more resistant variety. During plant trials in October last year, Ball Straathof planted ‘Beacon’ and ‘Imara’ between the susceptible ‘Super Elfin’ varieties. By January the ‘Super Elfin’ varieties had downy mildew and by the end of February had been decimated.

‘Imara’ showed downy mildew spores on the leaves and dropped the lower leaves but kept its flowers. ‘Beacon’ did not show any spores and maintained its neat habit. Both the resistant varieties continued flowering into the colder months, confirming their claims to season-long colour.

Impatiens Walleriana ‘Beacon’ grows into a tidy, mounded plant 25 – 30cm high and wide, with flowers carried above the leaves. The initial flower colour range consists of bright red, salmon, white, violet, orange and coral. New colours will be introduced annually. Plants are identifiable in stores from other varieties by a ‘Beacon’ label.

Getting the best from Impatiens:

● Plant en masse. Bedding Impatiens are designed to make a show, so the more plants the better.

● They do best in semi-shade such as morning sun with afternoon shade or dappled sun. The shadier the bed, the less they flower and the more they will stretch towards the light.

● Water regularly. Impatiens like consistently moist but not soggy soil. The more sunshine the plants get, the more water they need.