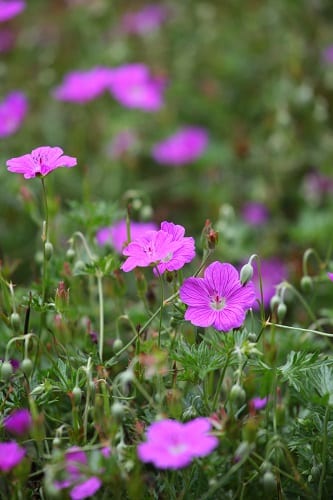 True Geraniums or Crane’s Bills – from the Greek word geranos, a crane, owing to its fruit which consists of a beak-like column which springs open when ripe, projecting the seeds away from the mother plant – are members of the genus Geranium and belong to the family Geraniaceae.

The Geraniaceae family includes true Pelargoniums (genus Pelargonium) and Bushman Candles, genus Monsonia. Many gardeners are blissfully unaware that the plants they refer to as ‘geraniums’ in their gardens are in fact Pelargoniums. This confusion can be traced back to the mid-eighteenth century when the Swedish botanist, Carolus Linnaeus, included both true Geraniums and true Pelargoniums under the same genus Geranium, but they were separated many years later.

True Geraniums differ from true Pelargoniums mainly in that they have regular (actinomorphic) flowers, meaning that they can be divided into equal halves in any plane, whereas Pelargoniums have an asymmetrical (irregular) shape, with the two upper petals differing in shape from the three lower petals and its flowers can only be divided into equal halves in one plane. There are about 270 species of Geranium and it is a cosmopolitan group of annuals, biennials and perennials which is widespread in temperate parts of the world and concentrated in the eastern Mediterranean region.

In South Africa there are about 30 Geranium species, which occur mainly in the Eastern and Northern summer rainfall region and are mostly perennial plants with a thickened taproot. South African Geraniums are long flowering and fast-growing and are ideal for mass planting in sunny or lightly-shaded areas in rock garden pockets; as edging plants to herbaceous borders; for cascading over low retaining walls; as ground covers to stabilise steep banks; and in window boxes, pots and mixed, hanging baskets.

They produce masses of mauve, pink, magenta and, rarely, white, rounded flowers on erect or sub-erect, slender flower stalks and form a dense mat of palmately-lobed leaves. They like a well-composted, slightly acid, well-drained soil and are long-lived if trimmed back lightly after flowering. Indigenous geraniums are best planted out in early spring and the plants flower mainly from late spring to late autumn. Initially, they need heavy drenching but once established are quite water wise.

They are strongly attractive to honey bees and butterflies which in turn attract insect eating birds. Three of the best species to grow are the perennials Geranium Drakensbergensis, Geranium Incanum and Geranium Multisectum. Propagation is easily achieved by seeds, from cuttings or by the division of clumps in autumn (Geranium Incanum) or spring (Geranium Drakensbergensis, Geranium Multisectum).

Geranium Incanum is perhaps the most commonly cultivated true Geranium in South Africa and is an outstanding and reliable garden or container plant in mild climates. It is endemic to a narrow coastal stretch in the mainly winter rainfall zone of the Southern and Eastern Cape extending from the Cape Peninsula in the west to Port Alfred in the east, occurring on stony hill slopes. Forming thick mats up to 30 cm high with a spread of 30-40 cm, Geranium Incanum produces an abundance of vivid pink, mauve or rarely white flowers on narrow, slender stalks from late August to May.

Its finely divided leaf lobes are borne on long petioles and have greenish-grey, smooth or hairy upper surfaces and hairy, white undersides that remain attractive, even when the plant is not in flower. Geranium Incanum performs admirably in granitic soils and is most effectively displayed cascading over low, terraced walls; in rock garden pockets as an edging ground cover to herbaceous borders and next to garden pathways and steps.

Honey bees find its flowers irresistible. This species often seeds itself in ideal conditions and the plants are essentially pest and disease free. Geranium Incanum has medicinal properties and infusions of the leaves and flowers are used as a tea to relieve bladder infections, diarrhea, menstruation problems and indigestion.