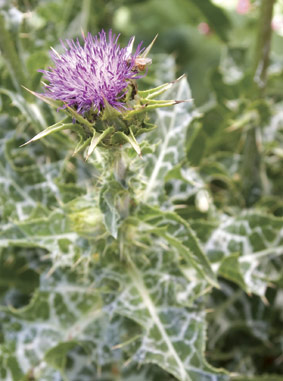 By late summer tall (about 1m), branched spires of prickly thistle flowers, topped with a magenta tuft of flowers, emerge. As the flowers mature a mass of black seeds develop, topped by a tuft of silky white hair. It is these seeds that, when ripe and mature, are the sole means of propagating this precious plant.

Milk Thistle is a tough annual (and sometimes biennial) that originated in Europe, the Mediterranean areas, central Asia and parts of east Africa. It was once cultivated as a vegetable; its young and tender leaves (stripped of their spiky marginal thorns) were cooked as a spinach while the young thistle buds were eaten like tender globe artichokes with a lot of butter. According to ancient legend, the plant got its name from the Virgin Mary’s milk that ran down onto the leaves and caused the veins to flow with white milk – hence the name marianum. Today it is a valuable medicinal plant grown for the pharmaceutical trade.

Sow the seeds in spring, in trays, and prick out the tiny seedlings when they are big enough to handle. They develop a long tap root and will not transplant successfully unless they are very small. Plant them out in deeply dug, richly composted soil in full sun, spaced 1.5 metres apart. The massive, fascinating rosette of prickly white-veined leaves forms quickly, followed by the flowering stalks. Once you have it in the garden it will re-seed every season.

Used through the centuries for treating the liver, today’s medical research proves milk thistle to be a superb diuretic tonic herb that regenerates the liver cells, treats hepatitis, cirrhosis of the liver, poisoning from alcohol, drugs and chemicals, and is extremely valuable in minimizing the effects of chemotherapy.

Milk thistle contains unique and unusual flavolignans – known collectively as silymarin – which protects the liver against toxins. So effective is it that in Europe it was used in ancient times to treat animals that had grazed on poisonous mushrooms. All parts of the plant are used as teas, tinctures and extracts – the seeds contain the most silymarin.

Steamed as a young and tender vegetable it makes tasty spinach served with lemon juice and salt and pepper and some country places in Europe pickle the buds for winter tonics.

Milk thistle tea is made by pouring 1 cup of boiling water over ¼ cup of fresh, chopped leaves. It is allowed to stand for five minutes and then strained. The tea is taken to increase milk flow in nursing mothers, as a tonic for depression, to stimulate bile flow and to relax spasms and gall bladder attacks, and to clear the liver. It is comforting and soothing after chemotherapy. Capsules containing milk thistle are also available at pharmacies, worldwide.