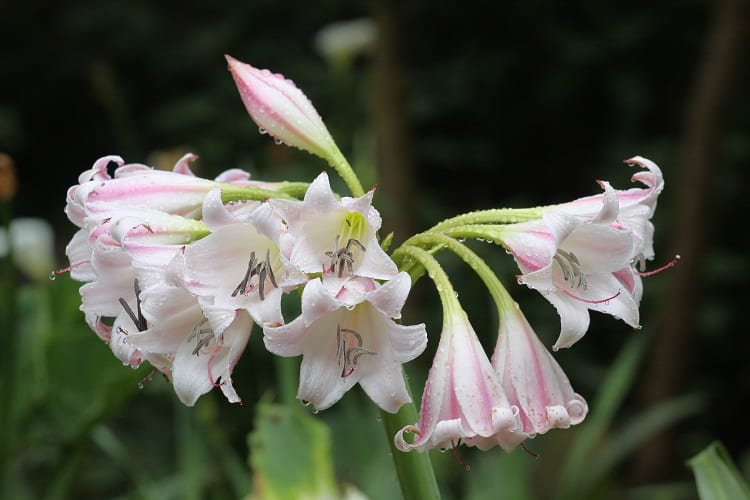 Crinums are members of the family Amaryllidaceae and have a very wide distribution in the tropics of Asia, Africa and America, extending into the warm temperate parts of both hemispheres. There are about 100 species; more than half of these occur in Africa, with some 23 found in southern Africa. Crinums range from dwarf, ground-­ flowering species such as Crinum Acaule (from northern KwaZulu-Natal), to giants like Crinum Asiaticum, from the Indian Ocean islands and the Far East.

Most species have flowers in shades of white or pink and the name Crinum is derived from the Greek krinon, meaning ‘white lily’. Crinums produce ­ fleshy, irregularly shaped seeds that are covered with a waterproof seed coat. They germinate immediately upon ripening. Over 150 toxic alkaloid compounds have been isolated from a number of Crinum species. Some are used in the treatment of certain types of tumours, and one has recently been used in the treatment of Alzheimer’s disease.

Mixed with other ingredients, the Zulu people utilize the bulbs and leaves of Crinum Macowanii to treat a number of conditions, including fevers and bladder and kidney disorders. The genus is highly prized in ornamental horticulture and, depending on the species, can be used as garden, pond or container plants. Three of the most rewarding species to grow are Crinum Campanulatum, Crinum Macowanii and Crinum Moorei. Like all members of the Amaryllidaceae, Crinums are highly susceptible to lily borer – Brithys Crini subsp. Pancratii (also known as amaryllis caterpillar).

In summer and autumn, the female moths lay their eggs on the underside of the leaves and along the flower stems. The tiny caterpillars bore into the tissue, causing the affected areas to turn black. The caterpillars have a voracious appetite and can cause massive damage within a few days, eventually boring into the bulb neck and sometimes resulting in the death of the bulb.

The English botanist J.G. Baker described Crinum Macowanii in ‘The Gardener’s Chronicle’ in 1878 from material collected by another Englishman, Peter Macowan, at Nomansland in the northern Eastern Cape. It also occurs in the Free State, KwaZulu-Natal and Mpumalanga and is one of the most variable South African crinums. Crinum Macowanii is a summer-growing species with a winter dormant period.

It is easily recognized by its rosette of broad, green or grey-green leaves with wavy margins. The leaves are produced at ground level from a football-sized bulb that is covered with hard outer tunics. In early summer, shortly after the appearance of the new rosette of leaves, the bulb sends up a sturdy ­flower stem carrying an umbel of eight to 25 large white pendent ­flowers with strongly recurved tips, each petal with a prominent deep pink central stripe. The flowers have a rather sickly sweet fragrance.

The ­flower heads reach from 0.25 to 1 m in height and are produced in abundance under ideal conditions of full sun, well composted, slightly acid or alkaline soil and regular deep watering. Frequently two or even three ­ flower heads are produced from well-established bulbs. The fruits that follow the ­ flowers are distinctive in that each capsule has a green ‘beak’, formed from the remains of the perianth tube. The fruits contain a large number of seeds; plants grown from them will take three to four years to ­flower.

Crinum Macowanii needs full sun and is best grown in groups of ‑ five to ten bulbs. It is the ideal candidate for poorly drained parts of the garden such as around water features. Plant the bulbs with the top of the neck just above ground level and keep a close watch on lily borers that appear as soon as the flower buds emerge. The lily borer eggs can be scraped off the undersides of the leaves or the caterpillars can be picked off by hand, but in areas subject to severe infestations preventive spraying with carbaryl is required. The bulbs seldom reproduce by offsets.