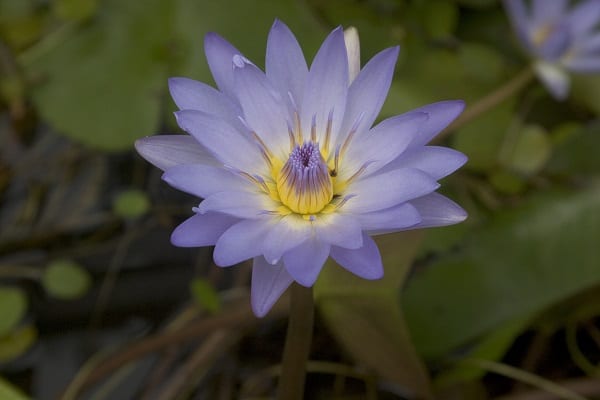 The decorative leaves of indigenous aquatics, like the Nymphaea Nouchali, and the showy blooms in season always command attention. They are easily grown in full sun, in still water that is protected from strong wind, and they can also be displayed in large water-filled ceramic containers in sunny courtyards.

In addition to their ornamental qualities, the mats of floating leaf pads serve as a platform for frogs, dragonflies and other insects while simultaneously providing protection from predators to a host of pond creatures, including fish fingerlings and tadpoles.

Their scented flowers attract bees and those of at least one species are edible. For the home gardener, three of the best indigenous aquatics that have ‑ floating leaves are Aponogeton Distachyos, Nymphaea Nouchali and Nymphoides Thunbergiana. A word of caution is necessary though: under ideal conditions, these plants can become overwhelming and require annual thinning.

Previously known as Nymphaea Capensis, the splendid ‘blue water lily’ is one of just two species in the family Nymphaeaceae that occur naturally in Southern Africa. Nymphaea Nouchali comprises four varieties: var. Caerulea from the Eastern Cape, Gauteng, Free State, KwaZulu- Natal, Limpopo, Mpumalanga, North West, Namibia, Botswana and Swaziland; the more widespread var. Zanzibariensis, which overlaps with var. Caerulea and extends into the Western Cape; and var. Ovalifolia and var. Petersiana that are both confined to Botswana.

The second species is the robust white to light yellow-‑ flowered Nymphaea Lotus, which is found in Gauteng, Limpopo, KwaZulu-Natal, Mpumalanga, Botswana and Swaziland. Nymphaea Nouchali var. Caerulea is a perennial, summer flowering plant that is partial to fully dormant in winter, losing all its leaves in the colder interior parts of South Africa but often retaining a few leaves in milder coastal areas. New leaf growth begins in early summer and the plants’ flowers in profusion from November to March.

The flower stems are held well above the water and the ‑flowers close at night. They are scented and each flower lasts a few days. The floating leaves are produced on short to long petioles, depending on water depth, and the plant grows from a strongly clump-forming rhizome. The leaves have wavy, upturned margins.

The Blue Water Lily needs full sun in summer; a rich, well-composted growing medium containing a little 3:1:5 fertiliser; a protected, wind-free environment and still water. Due to its vigorous nature, when it is to be grown in small ponds it is best planted in sunken plastic containers. For larger expanses of water, it can be planted directly into the soil at the base.

When planting the lilies directly in a pond or dam, place stones over and around the rhizomes to keep them in place and prevent them floating to the surface. The rhizomes can take a light frost and should remain in the water or moist soil during winter. Ideally, rhizome clumps should be lifted and divided every few years.