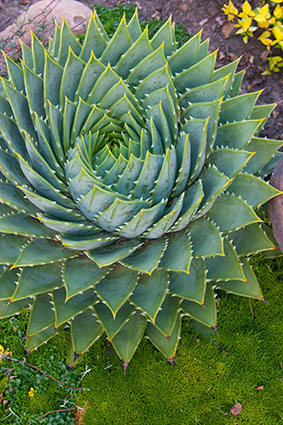 Aloe polyphylla is a stemless aloe with short, thorny, grey-green, upright leaves arranged in a perfect spiral. The leaf tips gradually dry out and turn a purplish black colour.

Light salmon to pale red flowers appear in September and October. These breathtaking aloes are very rare in nature, but they are cultivated for the garden market and sold by some specialist nurseries.

Sometimes we ignore or neglect them, but when the fiery flowers of the aloes appear, we cannot get enough of these plants. Nowadays nurseries stock many new aloe hybrids, and they bloom in so many stunning colours that even the most selective of colour connoisseurs is sure to be satisfied. From the small, humble varieties to the stately Aloe ferox and Aloe ‘Rex’, the plants in this genus are now high fashion and claiming their rightful place in our gardens.

South Africa has a wide range of indigenous aloe species, ranging across the summer and winter rainfall regions. There are also many new forms and varieties that have developed as a result of natural crossbreeding, a process aided and abetted by the birds and bees that visit the flowers for the nectar.

Aloe collectors (and there are many) also contribute to increasing the number of varieties available by walking between the plants during flowering season, and selectively pollinating them as they go. They practise endless patience and superhuman dedication and make sure they know exactly ‘who may court whom’. After years of careful monitoring they are eventually able to harvest seeds that produce modern aloe hybrids with lovely forms and superb flowering abilities.
Aloes have leaves that are arranged in a rosette around each stem and branch, and superficial root systems that continuously renew themselves. For every new leaf a corresponding root develops, but if that leaf dies the root remains as an anchor. The rosette shape of the leaves forms a natural funnel that channels water down to the roots, where it is absorbed immediately. It can be said that aloes take care of irrigating themselves, which is why they don’t often need a gardener’s help in that regard.

Aloes (with a few exceptions) are protected plants and may not be collected from the veld without the permission of the landowner or the necessary permit.

More Than A Garden Shed

How to maintain a healthy family and healthy heart at home