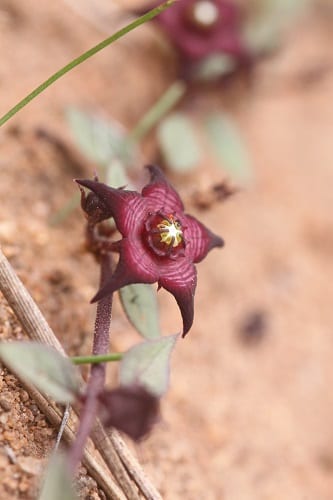 There are myriads of interesting and unusual plants growing in gardens and in the vast tracts of unspoilt wilderness that abounds in South Africa. They are often overlooked or simply not recognised. Many are well worth noting and getting better acquainted with for numerous reasons. One such plant is the Brachystelma Pulchellum that is found growing in grasslands where outcrops of Kwa-Zulu Natal group sandstone are prevalent.

The Brachystelma Pulchellum is a tiny little succulent has a swollen caudex underground which produces flat stems sporting small, dark green leaves. During summer minute, star-shaped, maroon flowers are produced at the nodes on the ends of the stems. The intricate detail in each individual flower is quite amazing. Blooms are followed by seed pods some 30 to 50mm long that are held upright like pairs of tiny horns. Next time you venture forth into suitable localities be on the lookout for this intriguing little plant.