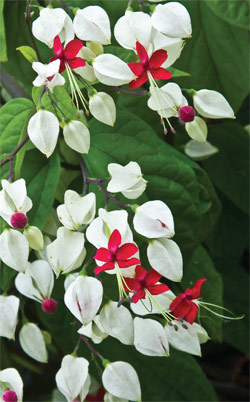 The genus Clerodendrum consists of numerous trees, shrubs and climbers, including the Bleeding Heart, that originate largely in tropical and sub-tropical Asia and Africa.

Many attractive garden plants grown in South Africa are amongst these, including one of my favourites, Clerodendrum Thomsoniae, commonly referred to as the Bleeding Heart. Indigenous to West Africa, this lightweight climber thrives in the warmer, frost-free regions, putting on a spectacular show in summer and early autumn.

Bleeding Heart is an evergreen, or semi-deciduous, climber with dark green leaves and slender, shrubby stems that require some means of support. The flowers are bright red, slender and tubular with five prominent petals. They emerge from within white, bell shaped calyxes creating the impression of a ‘bleeding heart’. The individual flowers are relatively small, though the entire clusters or trusses are large enough to create a spectacular display. Seeds are borne in dark red to black berries which appear occasionally. These should be removed if they develop as they are of no value.

Clerodendrums, including the Bleeding Heart, enjoy growing in sun or dappled shade, preferring rich, loamy soils that drain well. Do not try to grow them in poorly drained growing media. In colder parts and in Europe they are sometimes utilised as indoor plants for adding life to brightly lit positions.

Plant them against fences or trellises, over archways and up columns. Prune them back in early spring to encourage vigorous new growth that will produce masses of flowers. Regular monthly applications of plant food or water soluble fertiliser with high potassium content will ensure prolific blooming.

This African gem of the plant world is a charming addition to sub-tropical gardens where they add vibrant colour during the heat of summer. For those residing in colder climates there is always the option of enjoying them indoors. This is a plant for many regions.