Home » The Gardener » Meet the Bignonia family, both good and bad! 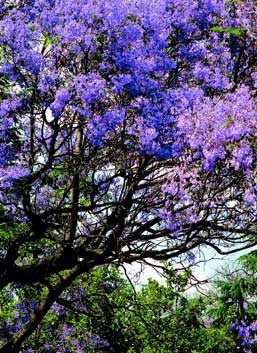 Meet the Bignonia family, both good and bad!

Much like human families, plant families, like the Bignonia Family, also count amongst their members both the gorgeous and the troublesome.

Some, of course, are a little or a lot of both!

The plant kingdom is classified into various family groupings that are often not fully understood by gardeners and plant enthusiasts, but rather left to intrigue the botanists. Nevertheless, it is fascinating to find out who is related to whom, especially in some of the larger plant families, so, this month, we take a look at the family Bignoniaceae – commonly referred to as the Bignonia family or Jacaranda family.

This particular family comprises 112 genera and over 720 species of mainly trees, shrubs and climbers, many with spectacular, large flowers. Most of them are found growing naturally in the tropical regions, predominantly parts of Central and South America, however, there are a number of Bignoniaceae family members, including some popular ornamental garden plants, indigenous to Southern Africa. When confronted with such a seemingly wide-ranging collection it helps to bear in mind that family groups are determined by the floral structure of individual flowers, rather than any other aspect of the physical appearance of the plant.

Perhaps the best known member of this diverse family is the Jacaranda – Jacaranda Mimosifolia – the magnificent flowering tree that was planted extensively in large parts of South Africa during the course of the last century and which has become an icon in many of our cities. Unfortunately, one of the characteristics of the plants in Bignoniaceae is that they produce copious amounts of seeds that are dispersed freely by wind.

The seeds then germinate readily in areas where the plants are not welcome, resulting in some being declared alien invaders. This includes the Jacaranda, which may no longer be planted in South Africa because of its invasive tendencies.

Some breathtaking flowering trees in the Bignonia Family

Suburban gardens in the sub-tropical regions of our country are often dominated by large flowering trees that belong to this family. The Jacaranda has already been mentioned; another stand out tree is Spathodea Campanulata, commonly known as the African flame or African tulip tree.

In summer these trees are adorned with large, bell-shaped flowers in shades of orange or scarlet with prominent yellow edges to the wavy petals. These are followed by long, woody, canoe-shaped seedpods filled with an abundance of paper-like seeds.

As with the Jacaranda, these seeds ensure that Spathodea Campanulata spreads far and wide into areas where they are unwelcome so, despite being indigenous to tropical Africa, they are no longer recommended for planting in our gardens. Fortunately we are still able to admire the splendid displays put on by existing trees.

The genus Tabebuia includes approximately 100 different species of evergreen and deciduous flowering trees originating from South and Central America and the West Indies. A few of them have been grown successfully in local gardens. During periods of autumn, winter or spring they’re emblazoned in tubular flowers of yellow, pink or mauve, usually when the plants are totally deciduous, creating a floral spectacle of some note.

A word of caution must be expressed about the tendency of certain of the Tabebuia to produce quantities of free-flying winged seeds, a trait that might see these plants being deemed to be somewhat unwelcome in the future. The yellow flowered Tabebuia Chrysantha is particularly fertile.

In the colder regions, Catalpa Bignonioides (Indian Bean Tree) from the south eastern parts of the USA has been grown as a hardy deciduous tree, producing attractive white flowers with prominent purple or brown markings in their throats. These are held in large terminal panicles in late summer. The large, heart-shaped leaves are also noteworthy. This is another one of those trees that is no longer grown in the trade.

The rather strange looking candle tree or candle stick tree, Parmentiera Cereifera, is a native of tropical, South and Central America. The unusual, cream or green-coloured flowers are borne on the mature branches and main trunk of the plant. These are followed by long, slender, yellow or green fruits (seed pods), giving rise to the rather appropriate common name. Apparently the fruit are eaten in certain parts of Mexico. This member of the Bignonia family was photographed growing in Durban Botanic Gardens.

Many of the most sought after climbers that adorn fences, pergolas and other structures in gardens belong to the Bignonia family: Clytostoma, Distictis, Mansoa, Pandorea and Pyrostegia are all included. Clytostoma Callistegioides (formerly Bignonia Speciosa) is a hardy, evergreen climber that produces masses of mauve or purple flowers with a yellow throat during the summer.

Distictis Buccinatoria (Mexican Blood Trumpet) has long been a favourite of Highveld gardeners for covering pergolas, car ports and fences. This evergreen climber has leathery leaves and is adorned with large, tubular red flowers with a slight purplish tinge through summer and autumn. The form Distictis Buccinatoria ‘Mrs. Rivers’ has purple flowers with a prominent yellow throat.

Mansoa Alliacea is the amethyst vine or garlic vine, a woody creeper that thrives in the hot, humid sub-tropical parts. The plants are covered in mauve flowers during summer and autumn. All parts of this attractive plant have a strong garlic smell. Pandorea Jasminoides (Bower plant) originates from Australia and has many different colour forms and clones available on the market. They are all free flowering evergreen climbers that don’t grow too rampant and wild, making them ideal plants for smaller suburban gardens.

Pyrostegiavenusta (formerly Bignonia Venusta) is the well known golden shower that blooms prolifically in late winter and early spring; it is a rampant deciduous climber that dominates many older gardens. These are but a few of the better known climbing members of the family. Others worth noting include Adenocalymma, Anemopaegma, Bignonia, Campsis and Tecomanthe.

Indigenous Members of the Family

With indigenous gardening so important it is heartening to know that the Bignonia family is well represented within the boundaries of Southern Africa. The sausage tree – Kigelia Africana (syn. Kigelia Pinnata) – is undoubtedly the most dramatic of all these plants. It is a quick-growing, deciduous tree found growing naturally in riverine vegetation and flood plains from northern KwaZulu-Natal up into Central Africa. Large maroon-red flowers with a velvety texture hang in panicles from the branches in spring.

Rich in nectar and pollen, the rather foul smelling flowers attract myriads of insects and birds, although they are reputed to be pollinated by bats. These develop into huge, beige to grey, sausage-shaped fruit that are filled with a fibrous flesh around the actual seeds and can weigh up to 7 kg. They are believed to be toxic, but certainly make for a fascinating spectacle in the garden. Another worthwhile shrub (or small tree) is Rhigozum Zambesiacum (the ‘Scrambled-Egg Bush’), which gets covered in fragrant yellow flowers after the first spring rains.

Podranea Ricasoliana, the Port St John’s creeper, is a free flowering, scandent, climbing plant that is cultivated around the globe. Terminal panicles of large, pink, trumpet-shaped flowers adorn the vigorous, woody limbs from winter to summer (which is why it also referred to as the ‘Pink Trumpet Vine’).

Podranea Brycei is the similar looking Zimbabwe creeper that tends to be of a lesser stature.

Tecoma Capensis (formerly Tecomaria Capensis), the Cape Honeysuckle, blooms prolifically for long periods almost throughout the year in the warmer parts of the country. It is available in a host of brightly coloured flower forms. The tubular flowers are borne in terminal clusters and contain abundant nectar that attracts sun birds and insects. These rewarding plants are extensively planted as hedges or screens in suburban gardens, along roadways and in large commercial landscapes.

Beware, Some are Aliens

The alien invader status of the Jacaranda has already been mentioned; two more members of the Bignonia family, Macfadyena Unguis-Cati and Tecoma Stans, are also causing environmental problems in parts of South Africa. Both should be identified and removed from infested areas and gardens alike.

• Macfadyena Unguis-Cati is the intolerable ‘Cat’s Claw Creeper’ that invades forests, plantations, urban open spaces and roadsides, scaling great heights by clinging to supports with its claw-like tendrils. In spring these rampant climbers are smothered in bright yellow, trumpet flowers which produce large amounts of seeds that disperse in the wind. Extermination and control is made all the more difficult because the root system is tough and tuberous, resulting in strong re-growth if the plants are merely cut down. Chemical control is the most effective means of eradicating this threatening weed.

• Yellow bells or Tecoma Stans is a free-flowering shrub or small tree that is spreading rapidly and profusely in our sub-tropical areas. Plants should be cut down and the stumps either treated with a suitable herbicide, or dug out completely. Everything should be done to try and prevent the seedpods from developing and dispersing their masses of papery seeds. It is extremely important that each one of us plays a proactive role in curbing the spread of alien invader plants in our beautiful land, irrespective of the family to which they belong.