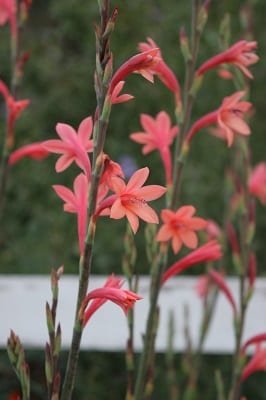 Watsonia Pillansii is a medium-sized irid, growing from 0.45 to 1.2 m high. It is widely distributed from the southern parts of the Western Cape to the Eastern Cape and the KwaZulu-Natal Drakensberg. It was named after the botanist Neville Pillans, who for many years worked in the Bolus Herbarium at the University of Cape Town.

Occurring from just above sea level to fairly high altitudes, forms of this species have varying degrees of frost tolerance. The brilliant orange flower spikes of Watsonia Pillansii appear from late November to early February with a peak in December and January, and can always be relied upon for a glorious show around Christmas.

It likes a full sun position in moist, well-composted loam or clay soil and is an ideal subject for mass inter-planting with the early-flowering evergreen Agapanthus Praecox subsp. Minimus ‘Adelaide’ that flowers simultaneously, creating a striking colour contrast.

In ideal conditions Watsonia Pillansii multiplies rapidly by corm offsets and the clumps like to remain undisturbed. Lifting and dividing usually becomes necessary after about five years and is best undertaken in autumn or early spring. As with all evergreen irids, the newly separated offsets should be replanted as soon as possible to prevent excessive desiccation of the roots.

The plants require a year to settle down before reliable flowering begins. They easily withstand the heavy winter rainfall that is experienced in the southern suburbs of Cape Town and are seldom attacked by mole rats. The leaves are subject to unsightly rust attack when grown in insufficiently sunny conditions.