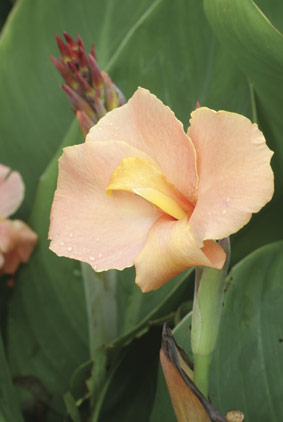 Although deemed by many to be of a bygone era, Cannas still remain spectacular garden plants when used in the correct context.

The post-war years saw many public parks and traffic islands planted with beds upon beds of Cannas in a host of bright and contrasting colours. These mass plantings are very definitely outdated and certainly not part of garden fashion in the twenty-first century; however, before we consider the use of these plants in the modern environment the matter of their alien invader status must be clarified.

Of the 50 or so Canna species found growing in the moist tropical and sub-tropical regions of North, South and Central America and parts of India, only Canna Indica (Indian Shot) has been declared as an alien invader plant in South Africa. The weed species has green or bronze leaves with narrow-petalled yellow and orange flowers, although single-coloured flowers of white, yellow, orange or red may also be found.

Growth is tall and vigorous with narrow leaves. Copious small flowers are borne, followed by fruits that are at first green and spiny. They then turn brown before splitting open and releasing multitudes of black, pea-like seeds with a hard outer coating. In the past children often used these seeds as ‘ammunition’ for peashooters. This tendency to produce vast amounts of viable seeds has seen many a garden overrun by Canna Indica, along with many watercourses and damp and marshy areas.

Please do not cultivate any Canna that self-seeds and spreads through the garden. Remove the plants and destroy them, ensuring that all tubers are dug out. Many of the other species may have similar invasive tendencies and are therefore not cultivated for ornamental purposes.

Hybrid cultivars are not considered a danger and the legislation clearly states that they are excluded from the alien invader list, allowing gardeners to continue using these rewarding plants in ornamental settings. The foliage of the hybrids is usually green, sometimes bronze or plum to almost black, with a few variegated or striated variants as well.

Flowers appear from spring to autumn on stately stems and vary from cream to yellow, pink, orange and red, while some have bi-coloured or multi-coloured blooms, often strongly contrasting. Spent flower stems must be cut back to ground level immediately after flowering in order to encourage the formation of further flowers.

These herbaceous perennials are used today as much for their bold foliage as their brightly coloured flowers. Modern pots and containers planted to Cannas always impress. Clumps interspersed amongst shrubs and other perennials contrast strikingly with the companion plants.

Use Cannas as focal points in mixed pots or containers filled with an array of spring and summer flowering perennials and annuals. Used discreetly and wisely these easy-to-grow and rewarding plants add body and substance to many gardens. Just do not allow them to take over the garden or dominate the landscape.

Cannas grow best in rich, loamy soils and always benefit from an annual mulch of well-rotted animal manure in early spring. This encourages lush, healthy foliage and masses of blooms right through the flowering season. Whilst they survive dry periods in harsh climates due to the food reserves stored in their fleshy rhizomes, they definitely grow best when watered lavishly.

In warm, frost free climates they can be coaxed into continuous growth by watering and feeding through winter. In colder climates they go completely dormant during winter, emerging with new spring growth when temperatures rise. Full sun or dappled shade gives the best results – too much shade results in weak, straggly growth and few, if any, flowers.

It is easy to propagate Cannas by simply dividing up the rhizomes in early spring. This task should be carried out at least every second year to rejuvenate the plants. Cut all the foliage stems off level with the ground and lift the rhizomes carefully with a sharp garden fork.

Cut the fleshy rhizomatous stems into sections that are about 10 to 15cm long, making sure that each section has a prominent new growth bud (called an ‘eye’). Prepare the soil for replanting by digging in lashings of compost, along with a root-stimulating fertiliser like superphosphate or bone meal. Plant the sections back into position at a depth of 8 to 10cm.

In much the same way that certain items of clothing or furniture seem to return to fashion, Cannas are likely to do the same. They are just so easy to grow and so rewarding at the same time; not many plants can boast of a pedigree like that.