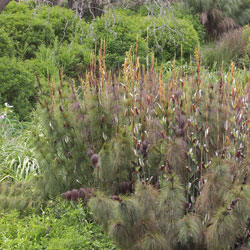 Elegia is one of many plant species belonging to the family Restionaceae, a group of rush-like plants found largely in the Western and Eastern Cape provinces, although others occur in Australia and Vietnam.

Male and female flowers are borne on separate plants, often leading to confusion and misidentification within the family. Of all the many members of this very interesting group of plants, Elegia capensis is one of the most attractive and widely cultivated, both locally and abroad.

They are evergreen, clump-forming perennials comprised of multiple, tall stems that can attain a height of 2-3m. Each stem is a rich green colour with whorls of feathery, secondary stems growing out from nodes along the stem. Leaves are almost absent and have developed into coppery-brown bracts found on some stems.

Photosynthesis takes place in the stems themselves, rather than in the leaves. Small, green flowers appear on the tips of the stems in late spring, maturing into copper-coloured seeds in autumn. Plants growing in less favourable growing conditions will attain lesser proportions.

The stems have been used for centuries to make brooms, hence the Afrikaans name – Besemriet. The foliage is often harvested and used in flower arrangements where it lasts for weeks. In the garden, plants are grown amongst Proteas and Ericas in fynbos gardens. However, this particular restio adapts well to most climates except the very coldest, where they succumb to heavy winter frost.

This has made them popular garden plants around the country where they are often found near ponds, streams and water features. They grow best in poor, sandy soils that remain moist for most of the year. Untidy stems must be pruned down to ground level and sometimes the entire clump needs to be cut down in spring to encourage healthy, new growth. In nature this task is often performed by fire. The clumps regrow rapidly.

Elegia Capensis is undoubtedly one of my favourite plants from the Cape fynbos – a fine garden plant with a graceful, distinctive shape and growth habit.