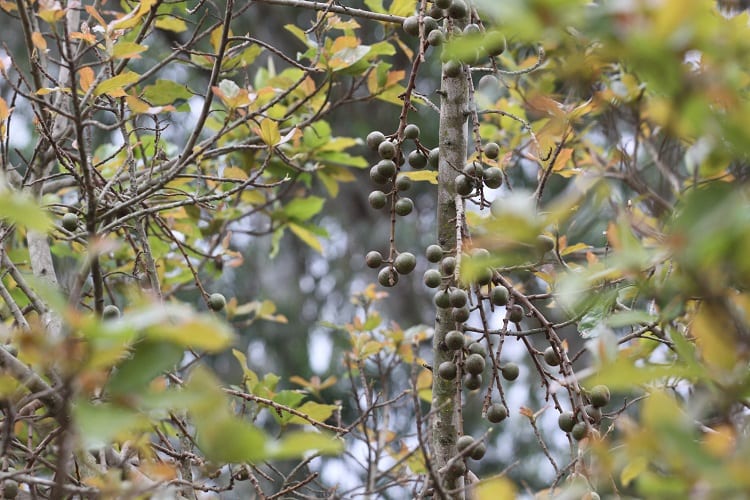 This large, evergreen tree provides a haven for a wide diversity of animal life. The fig family Moraceae has 35 Ficus species in Southern Africa and the Ficus Sur ‘Cape Fig’ is a common tree across much of sub-Saharan Africa. It is found from the Southern Cape to Limpopo and across the tropics to Yemen on the Arabian Peninsula.

Previously known as Ficus Capensis, this large, evergreen or semi-deciduous tree grows 12-30 m high and is found mainly in forests and along water courses. It has a smooth, light grey bark and develops a large spreading crown with age.

It produces masses of figs in dense, branched clusters along the main trunk and lower branches. Various stages of developing figs occur along the same branch, resulting in eye-catching and unusual splashes of red, pink, green, purple and brown. The copper-coloured new leaves contrast effectively against the older grey or grey-green leaves in spring and the leaf margins are lightly serrated and wavy.

The Cape Fig is an ornamental, fast growing shade tree suitable for medium to large gardens in frost-free areas. It likes as much moisture as it can get and thrives in full sun or light shade in well-composted, granitic soils. The figs are fairly sweet and produced at any time of year, but appear mainly from spring to autumn.

They are heavily parasitised by insects and the leaves serve as a food source for moth and butterfly caterpillars. The figs are relished by countless fruit-eating birds, as well as by fruit bats and monkeys. They are also sometimes eaten by humans. Planting sites for Cape Figs should be carefully chosen as their vigorous surface roots are invasive and will soon lift paving and damage pipes, walls and swimming pool surrounds. Ficus Sur is an excellent choice as a rapid screen against unsightly buildings.