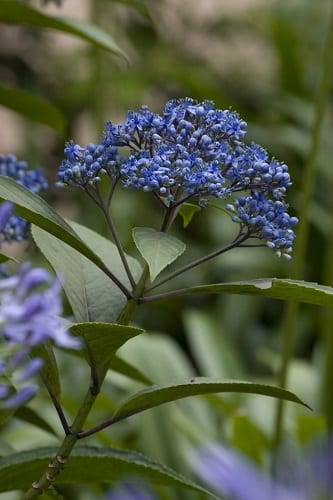 Dichroa Versicolor – the ‘Evergreen Hydrangea’ – is a close relative of the Hydrangea and originates from China, the Himalayas and Japan. This unusual plant was originally sold in South Africa as the ‘Hong Kong Hydrangea’.

It forms a large evergreen shrub up to 3 metres tall and about half as wide, clothed in pale green, sharply pointed leaves. In summer and autumn the bush is smothered in terminal clusters of tiny, star-shaped, usually blue flowers.

Like its close relative, the colour of the flowers is determined by the chemical composition of the soil in which the plant is growing. Acid soils, rich in iron and aluminium, change pink flowers into a deep blue colour.

The blooming period for Dichroa Versicolor is significantly longer than that of the ordinary Hydrangea Macrophylla. It grows best in dappled shade, preferring rich, loamy soils and regular watering and can withstand moderate winter frost. It makes a superb background shrub for mature gardens with large trees.