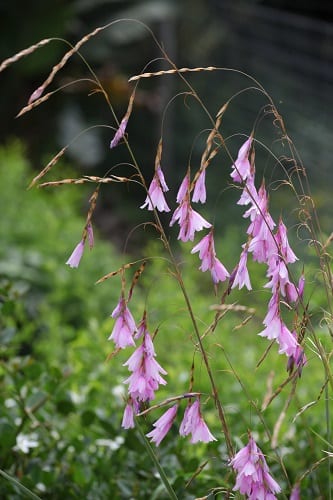 Dieramas are members of the iris family, Iridaceae, and are noted for their graceful, arching sprays of pink, mauve, reddish, white or, rarely, yellow bells, their evergreen habit and tolerance of frost.

Several species and their selections are quite widely grown in gardens of the northern hemisphere, yet only about five species are in general cultivation in South Africa. Three that have become fairly widely available in recent years are the shellpink Dierama nixonianum which grows to 1.2 m, the bright pink D. latifolium which grows to 1.1 – 2.7 m, and a probable hybrid resembling the bluish-mauve D. trichorhizum, which grows to 60 cm. D. pendulum reaches 1 – 2 m in height, it’s graceful, arching flower spikes appearing in spring and early summer.

These plants are most attractive when planted next to rocks and in rock garden pockets, and even towards the centre of herbaceous borders. They are highly decorative when planted in wide-brimmed, relatively shallow containers placed adjacent to garden ponds and water features where their spikes can hang over the water. The corms are relished by mole rats and, in areas where moles present a threat, the corms can be protected by surrounding the clumps with wire mesh at planting time, then placing several rocks around each clump.

The leaves are susceptible to red spider mite in summer if grown in enclosed conditions. Thick clumps can be lifted and divided in autumn or early spring.

As already mentioned, flowering amongst the various species takes place mainly from September to March. They should be left undisturbed for at least five years as best flowering results are obtained from well-established clumps. If the clumps become overcrowded after about five years, flowering might diminish in which case it is a clear sign to lift and divide the clumps carefully.

How to grow Dieramas

Seeds : Seeds are best sown in early summer in deep pots or seed trays. The ensuing plants should be allowed to become established for a year before they are potted-up individually into planting bags and then only planted into the garden or permanent containers at the beginning of their third spring. At the time of planting, care must be taken not to disturb the roots. A heavy drench is needed directly after planting.

Corms : Corms can be harvested from overcrowded clumps in early spring. The corms are persistent and form long ‘stacks’ with age. Inactive corms that accumulate directly below the youngest (uppermost) corm can often be persuaded to grow by detaching them and planting them in the normal way.

Although the plants undergo a semi-dormant phase in winter, they retain their leaves and do not take kindly to having them cut down as this sets them back considerably. Only the dead, outer leaves should be removed.

Dieramas are native mainly to the eastern part of southern Africa, which has about 37 species, but are also represented in east Africa as far north as Ethiopia.

Dierama pendulum is endemic to the western and southern parts of the Eastern Cape, where it grows in grassy habitats at the edges of marshes and in stony ground. Flower colour varies – some are shades of pink and there is also an attractive white form.

Dierama are sun-loving plants and require full sun throughout the year in order to flower well. They are suited to north-facing rock garden pockets, planted beside garden ponds, incorporated into herbaceous borders or grown as specimen plants in deep containers. They enjoy slightly acid, well-composted soils.

These slender plants need regular, heavy drenching in summer but are fairly drought-tolerant in winter and can tolerate temperatures as low as -50 C.