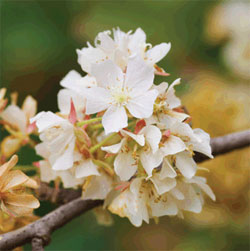 Dombeya Rotundifolia, one of the most attractive and reliable of the indigenous trees suitable for suburban gardens, has long been a favourite of mine.
This tree can certainly be described as a true harbinger of spring; it is ever reliable in announcing the onset of warmer weather with a flurry of early white flowers.

The blooms closely resemble pear blossoms, hence the common name of ‘Wild Pear’. (Interestingly, despite this similarity, it is not in any way related to Pyrus, the genus that gives us Pyrus Communis subsp. Communis, the cultivated European pear.)

Dombeya Rotundifolia is a relatively quick growing, deciduous tree that attains a mature height of approximately 5 or 6 metres and has a rounded growth habit. The leaves, as the species name implies, are round (rotund) with a diameter of 30 to 150 mm. They are dark green on the upper surface and paler beneath, with a rough, almost sandpaper-like texture.

In autumn they fall, exposing the dark, cork-like bark, and letting the naked limbs of the tree form a striking silhouette. In late winter or early spring the sweetly-scented white flowers appear in large clusters on the branch tips and in the leaf axis. They attract big numbers of bees and butterflies to the garden. The blossoms remain on the tree for an extended period, turning brown before eventually shedding after the seeds have formed.

Although the Wild Pear prefers free-draining soil it will grow in most soil types, allowing it to be planted in a wide range of garden conditions and in a diverse array of climatic zones. It is drought and cold resistant and the thick corky bark is fire tolerant, making it useful even in areas where veld fires are a regular occurrence.

Fresh seeds germinate readily and new trees can easily be propagated by the home gardener. This is a top class garden tree. It is especially valuable for smaller properties where limited space is a major consideration, but also eminently suitable for bigger gardens, farms and conservation areas.