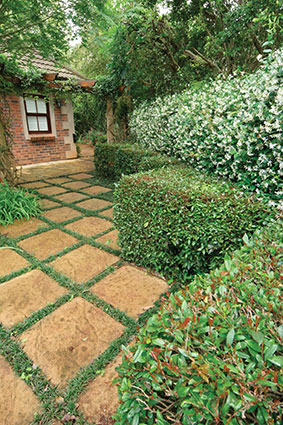 Syzygium Paniculatum is a well-known garden shrub with a multitude of uses. It is evergreen, has dense foliage, and grows rapidly to a height of up to 4 m if left unchecked. It is most often used for hedges, and sometimes as a screen to hide unsightly areas. It has a shallow root system that doesn’t usually damage structures.

It is naturally pyramid-shaped, but with some artistic pruning it can be shaped into practically any form, including intricate topiaries. Syzygiums pruned into single stemmed lollipops and standards by commercial growers are used in formal garden designs and as potted plants. They are also popular with gardeners who have small gardens and need plants that can provide height in a restricted space.

When does the Syzygium Paniculatum bloom?

Creamy powder-puff flowers appear early in summer, followed by fairly small, edible, dark pink to red fruit. Syzygiums are pruned so regularly that one does not see flowers that often.

Syzygiums are sensitive to extreme cold and frost, but will grow almost anywhere.

Location: full sun to light shade – one of the reasons why it is such a popular hedge plant is its ability to grow in areas where the light changes, such as in narrow passages between buildings.

Soil: well-drained, fertile soil is ideal. If you want to plant a hedge, rather dig a trench instead of individual planting holes. This will help you plant the hedge in a neat straight row as well as make it easier to prepare the soil. Mix the extracted topsoil with liberal quantities of compost and bone meal. Also place several spades of compost and bone meal in the ditch and mix it with the sub-soil. Place the young plants in the trench, about 50 cm to 1 m apart, and at the same depth they were growing in their nursery bags. Fill with the enriched topsoil and water immediately, then keep the soil moist until you see the first signs of growth.

Water: medium water consumption. Syzygium is tough and established plants can endure relatively long periods of drought. However, the foliage on your hedge or lollipop will be far lusher if you water the plants regularly during summer

Fertilizing: a dose of nitrogen-enriched fertilizer in spring and again in late summer is sufficient. Feed topiaries, lollipops and standards more regularly, because they need extra energy after each pruning session to produce new and denser foliage. (Stop and pinch off the growth points each time you walk past one of them, to keep them in perfect shape.)

Start when the plants are young and regularly give the growth points a light trimming. Continue to cut back the sides until the hedge has reached the height you had in mind. When this happens, you can trim across the top to stop any vertical growth and to encourage lateral growth. Thereafter, trim the hedge regularly to retain its neat shape. As the hedge grows, you need to shape it in such a way that the top is narrower than the base. This allows the entire hedge to be exposed to the sun, which prevents bare patches developing at the base.

Densely-growing syzygiums can often become infested with aphids. They secrete a sticky substance (called honeydew) which attracts ants, and the ants in turn spread the aphid eggs to other plants. Ant nests in the vicinity thus need to be dealt with.

Sprinkling systemic insecticide granules around the plants can give them protection from aphids for up to a year.

Syzygium paniculatum ‘Globulum‘ is a lovely dwarf or more compact syzygium that has tiny dark-green glossy leaves and grows at a snail’s pace. White flowers appear during summer, followed by pink-grey berries. These plants are lovely candidates for topiary, whether you simply want to trim them into balls or cubes or you have even more patience and imagination and want to play with complicated animal shapes. The simpler ornamental shapes are very pretty in pots. A little shade does not lead to sparser foliage, which makes ‘Globulum’ especially useful if you need to plant a small formal hedge that can grow partly in direct sunlight and partly in the shade of an overhanging tree.