Home » The Gardener » Build a Pergola 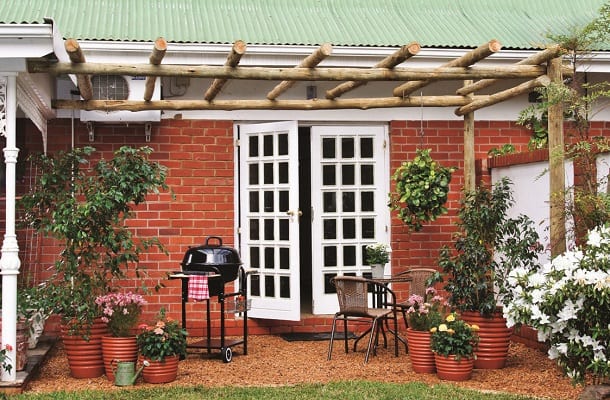 Adding a pergola to an existing patio –or creating one from scratch – is not as complicated as you may think. The beauty of pergolas is that you can choose a climber of your choice to ramble along the poles, giving shade and protection in the heat of summer. And if you still want to let light and warmth in during winter, then simply go for a deciduous one.

(The specifications below are for a pergola to fit ours – the measurements for your pergola will differ according to the size of extension you want to build from your house.)

1. Before buying your materials, measure up the area which you envisage the pergola covering – for length, breadth and height dimensions. The existing roof edging often determines the height as this ensures a far more aesthetically pleasing pergola that fits in with the architecture of the house.

2. Determine the position of the upright poles, opposite the existing wall of the house that will support your pergola extension. Ideally, they should be spaced not more than 3 m apart. Next, dig the two holes for the poles, a minimum of 600 mm deep and 500 mm wide.

3. Create a concrete mix of 2 parts stone, 2 parts sand and 1 part cement. Place each pole in the centre of its hole and only then pour the concrete mix around the pole. Agitate the mixture to ensure it fills all the space of the hole.

4. Using the spirit level, adjust each pole until it is exactly vertical. Allow the mixture to dry for 24 hours before proceeding.

5. The horizontal tie-beams now need to be attached to the upright poles to give the structure strength and stability. First, place the pole brackets on the existing wall opposite the two upright poles, at the required height, and mark. Drill and attach the pole brackets to the wall using Hilti screws and plugs.

9. Now, using coach screws, attach the support-beam (which is slightly shorter than the cross-beams) between the two upright poles (placed underneath the tie-beams) to make the structure more sturdy.

10. You are now ready to fix the cross-beams on top of the tie-beam framework. These will form the ‘canopy’ of the pergola. Position the first one so that it is resting where the tie-beams join the upright poles, parallel with the support beam between the two uprights. It should have an overhang of 100 mm on the inner, wall side and 500 mm on the outer side of the tie-beams. Once positioned, mark where the cross-beam rests on the tie-poles, remove it, and drill pilot holes. Fix it with coach screws.

11. Position and fix the remaining six cross-beams 550 mm apart to complete the canopy of the pergola.