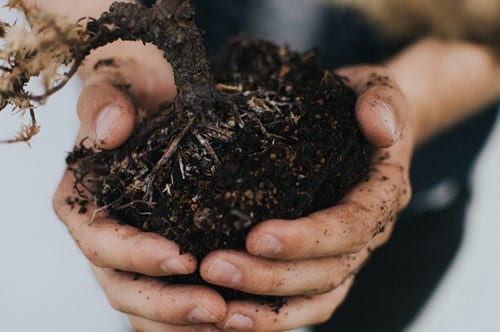 There are no hard and fast rules about fertilising, but a productive food garden often needs less fertiliser than you may think.

It is only in February that longer crops like tomatoes, brinjals, peppers and long season squashes may need feeding because they have exhausted the nutrients in the soil. Good soil preparation is the fundamental principle of food gardening. If your soil is thoroughly prepared with each new planting, there should be enough nutrients for the growing cycle of most crops. This also speaks to another food garden principle which is about maximising resources.

Fertilisers are expensive and unnecessary fertilising wastes money and can produce soft, sappy growth that is more disease prone. Fertilising during the growing season should only be necessary when you observe deficiencies that need to be corrected. This includes yellowing leaves – a need for nitrogen – slow, spindly growth and some diseases like blossom-end rot of tomatoes which is attributed to calcium deficiency.

Cutworms also tend to be active in soil lacking calcium. Soil types can have an effect, especially sandy soil which is quickly leached of nutrients. Excessive rain also leads to a nutrient deficiency. Fertilise individual plants as they need it rather than fertilising everything, which is not only expensive but also could promote leaf development at the expense of fruit.

Plant and soil tonics build plant health which makes them more resistant to pests and diseases. The tonics are kelp or fish emulsions, such as Seagro or Kelpak, which can be used as foliar feeds and soil drenches, as well as compost and green teas, worm tea and vermicompost or worm castings (fertilis). Complete fertilisers can be divided into the chemical (MultiFeed) and the organic (Nitrosol, Margaret Roberts Supercharger, Vita Grow).

All these are effective and the deciding factor for which one to use is its cost and performance. Experienced food gardener, Di-Di Hoffman, prefers using tonics first because they tend to treat the cause of the problem and not simply the symptoms. He also does not advise mixing a tonic and a complete fertiliser into one drench because this makes it hard to know which of the two is working. Rather try the tonic first and wait for a few days. If there is no response, apply the fertiliser.

Make Your Own Tonics

Using Complete Fertilisers
When applying a complete fertiliser, use half the recommended dose but apply it at more regular intervals. In other words, apply half the dose once a week or every second week instead of the full dose once a month. Doing it this way provides a steady, gradual input of nutrients rather than a nitrogen explosion that can cause growth spurts followed by a decline. You also don’t want too many green leaves at the expense of fruit production.

The optimum period for feeding is from the seedling stage through to flowering. Once the fruit has formed fertiliser won’t have any effect. Fruit producing vegetables tend to draw existing reserves from the plant so any new applications of fertiliser go to waste. Foliar feeds, especially tonics, applied as a foliar feed, give plants a boost in very hot weather. They are also effective in very wet weather when the wet soil reduces the uptake of nutrients by the roots.