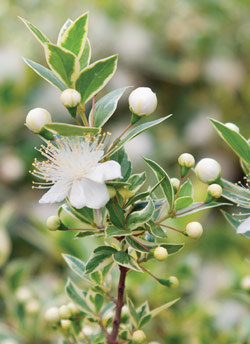 Myrtaceae is a large family of mainly trees and shrubs, including the Myrtle, with over a hundred different genera, thousands of species and a huge number of garden hybrids and cultivars.

Many well-known plants of gardens, agriculture and other commercial enterprises are part of this botanical family. Perhaps the best known in South Africa are the ‘gum’ trees or Eucalyptus trees that originated in Australia and yet have become so established here, much to the detriment of our own indigenous plants. Their prominence is due largely to commercial plantings of timber and to early settlers having used gums as quick growing, evergreen windbreaks in harsh climates.

These offered them protection, plus fuel in the form of firewood, as well as timber for building. Nowadays, outside of commercial forestry plantations, they are largely considered a major problem and are being eradicated.

The plant commonly known as myrtle is Myrtus Communis, an evergreen shrub from the Mediterranean region and North Africa. It has strongly aromatic, evergreen foliage and fragrant cream to white flowers and has been cultivated since ancient times. Various garden cultivars, including some with variegated foliage, remain popular ornamental plants.

Whilst a large proportion of the Myrtaceae family is indigenous to Australia, four genera have members that belong to our part of the world. These include Eugenia (Wild Myrtles) and Syzygium (Water Berry trees) of which there are a number of different species.

More and more of these glossy-foliaged evergreens are being grown commercially for use as garden plants. Eugenia  Capensis, Syzygium Pondoense, Syzygium Guineense and Syzygium Cordatum are but some of the better-known indigenous plants of the Myrtle family. The latter, Syzygium Cordatum, commonly known as Umdoni or Water Berry, is a well-known indigenous tree found growing in the wild along watercourses and in damp areas from the Eastern Cape right up into Mozambique. In the garden its deep purple fruits attract an abundance of bird and insect life.

Many of the garden trees and shrubs that were very popular ornamental plants with previous generations belong to the Myrtle family, including the Bottlebrushes (Callistemon) in all their wide variety, Tea bushes (Leptospermum), Paper barks (Melaleuca) and Acca Sellowiana (Pineapple Guava), formerly known as Feijoa Sellowiana.

New hybrid Bottle-brushes and Tea bushes are still being developed for the garden, and they all eventually arrive on the local market. They are evergreen, cold hardy plants that bloom profusely and make a spectacular spring display, characteristics that are always much appreciated.

One of the most prominent garden plants in suburban settings is the golden coloured Melaleuca Bracteata ‘Revolution Gold’, affectionately referred to as “Johannesburg Gold”. A quick growing evergreen shrub that has reached tree size proportions in many locations, ‘Revolution Gold’ continues to make a major impact in gardens. Another easily recognised plant from this family is Geraldton wax (Chamelaucium Uncinatum), which is grown in Mediterranean climates as a garden shrub and which provides long-lasting cut flowers.

Many Edible Fruits from the Tropics

Many commercial crops are produced by members of the Myrtaceae family; these include cloves (Syzygium Aromaticum), bay rum (Pimenta Racemosa is one ingredient), allspice (Pimenta Dioica), tea tree oil (Melaleuca Alternifolia) and, of course, the timber and aromatic oil from Eucalyptus trees.

There is a long list of plants in the myrtle family that were used to form boundary hedges, screens and windbreaks, these include Turpentine trees (genus Syncarpia) and Brisbane box (previously of the genus Tristania, now Lophostemon). Another is Syzygium Paniculatum, the Australian brush cherry, which is so popular as a hedge and topiary specimen. Some of these plants that were used en masse have become problematic, and some have been declared invasive.

The most common alien invader plants from this family include Syzygium Cuminii (Jambolan), Syzygium Jambos (Rose apple) and Eugenia  Uniflora (Pitanga or Surinam Cherry) and certain specific Eucalyptus species (it must be noted that not all Eucalypts or gum trees are alien invaders). The ordinary Guava tree and the Cherry Guava (both Psidium species) are also declared invasive plants. They may not be planted in gardens, and may only be grown in controlled orchard environments.

Theirs are some of the most controversial classifications, but these trees have spread far and wide through human and animal consumption of their fruit, and now pose a serious threat to many fragile ecosystems.

The Myrtle family is an interesting group of plants, in some places so loved, and in others detested due to their invasiveness. Despite these perceived failings, we need to realise just how much we should respect and enjoy every organism living on our beautiful planet. Without plants and their chlorophyll-rich green foliage, life as we know it would simply not exist (and botanical families and plant classification would be of absolutely no significance).