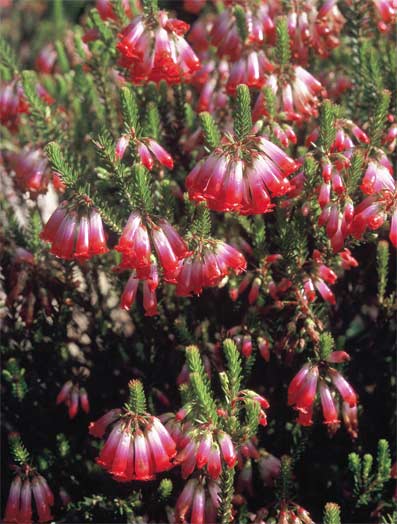 The exceptional beauty and diversity of their floral form make Ericas irresistible to gardeners; these three species are well suited to cultivation.

Within the genus Erica there are more than 800 species occurring in Africa, Europe and the Middle East, with by far the largest number found in Southern Africa (more than 760 species). These local Ericas form one of the main constituents of the distinctive Cape flora (Fynbos), along with Restios, Proteas, Buchus and Brunias.

Requirements for success with Ericas include full sun; an acid, well drained soil; free air movement around the plants; regular heavy rainfall (or watering) in winter and as little disturbance to the roots as possible.

Ericas are best planted out into the garden and into permanent pots from late autumn to early winter, once temperatures have cooled markedly. Once planted, they need to be kept well irrigated, and the soil surface should be kept as cool as possible by mulching or inter-planting with companion Fynbos ground covers.

Weeds that develop close to the plants should not be pulled out but simply cut off just below soil level; this ensures as little root damage as possible. The plants benefit from applications of seaweed-based fertiliser and can also be fed with controlled release fertilisers.

Fresh seeds germinate easily when sown in autumn and treated with a smoke extract. Ericas are ideally suited to rock gardens and containers, they attract nectar-feeding birds and those with long stems make useful cut flowers. Although many species are difficult to maintain in cultivation over the long term, Erica Cerinthoides, Erica Nana and Erica Regia are three that, under suitable conditions, can be relied upon to perform well for many years.

These three have been grown to perfection by Erica expert Anthony Hitchcock at Kirstenbosch Gardens in Cape Town.

Specimens of Erica Nana were discovered by the Scottish plant collector Francis Masson in 1774; today this plant is allocated a conservation status of “vulnerable”. In nature it is found in a highly restricted range in the uppermost reaches of the Hottentots’ Holland and Kogelberg Mountains east of Cape Town.

It is a dwarf species that forms thick mats of sprawling branches up to 1 m across and 0.2 m high. In spring and early summer the branches become laden with large, deep yellow tubular flowers with prominent brown anthers. The woody branches of Erica Nana need no pruning, and the plant is seldom subject to pests or diseases.

Although slow-growing it is a long-lived plant under ideal conditions. It is perfectly suited to rock gardens and can also be planted so that it sprawls over low garden walls. In rock garden pockets it is best grown in groups of three and can be successfully inter-planted with the dwarf, bright red spring-flowering Watsonia Coccinea and the deep blue Babiana Angustifolia.

It also makes an outstanding subject for containers and can be most effectively grown in a ‘strawberry pot’ that accommodates several plants – a magnificent display of Erica Nana grown in a strawberry pot by the Erica enthusiast Dr Louis Vogelpoel regularly won first prize at spring wild flower shows in Cape Town during the 1970s and 1980s.

Red Hairy Heath, Fire Heath. Described by Carl Linnaeus in 1762, Erica Cerinthoides is probably the most easily recognisable member of this exceptionally large genus. It has the widest distribution of all the southern African Ericas, extending from the Soutpansberg Mountains in Limpopo in a south easterly direction to the southernmost tip of the Cape Peninsula, and up the west coast to the Cederberg Mountains.

There are two varieties: var. Cerinthoides, which occurs throughout the distribution range, and the shorter-flowered var. Barbertona, found from Mpumalanga to the Drakensberg and Swaziland. Erica Cerinthoides is found in countless different habitats and is an extremely variable plant with respect to flower size and colour, plant height, degree of leaf hairiness and flowering period.

Its persistent root stock allows it to survive even severe bush fires, rapidly re-sprouting at any time of year, but especially in autumn or spring after the first winter or summer rains have fallen. The flowers appear at any time of year but mainly in spring and summer, and are extremely sticky, frequently trapping small insects including flies and moths.

Erica Cerinthoides is a long-lived species and best suited to cultivation in rock garden pockets or in groups of three or more amongst rocks in garden beds. It also performs well in deep containers with a diameter of 25 to 30 cm. Young plants form neat, compact bushes during the first few years, thereafter becoming lanky and woody with age, reaching a height of up to 1 m, so it is essential to prune back the branches by half after flowering.

Forms of this species from the Drakensberg can take moderate frost while those from temperate regions in the South Western Cape can only take light frost for short periods, but will re-sprout if damaged.

In the wild Erica Regia, one of the most attractive of all the Ericas, is confined to sandy flats in the Elim area of the Bredasdorp district, where it can be found flowering at any time of year, but mainly in spring. It is endangered in its natural habitat due both to agricultural extension and infestations of alien invader plants, but fortunately it responds very well in cultivation.

Untamed it grows into a straggly, erect, woody shrub reaching to 0.7 m high, but with regular pruning it can be persuaded to form a compact low shrub. The species performs equally well in rock garden pockets and deep containers and likes regular deep watering throughout the year. It is sensitive to frost.

Directly after flowering the branches should be pruned back lightly to encourage bushy, new growth. The exceptionally long-lasting, sticky flowers are irresistible to several nectar-feeding birds including southern double-collared sunbirds and orange breasted sunbirds. Of course, the flowers make an eye-catching addition to a mixed Fynbos vase. Certainly the most attractive colour variant for cultivation is the form with white upper corollas and bright red lower corollas, previously known as var. Variegata.

Erica Regia can be attractively inter-planted with other Fynbos gems including Agathosma Ovata, dwarf Restios and Gladiolus Carneus.

Article by by Graham Duncan