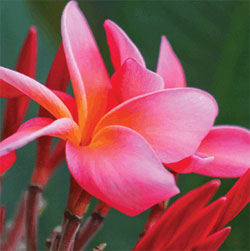 Plumeria Rubra, one of the seven or eight species of Plumeria that are found in the wild and that go under the common name of Frangipani, occurs naturally in Mexico, Central America, Colombia and Venezuela. For centuries it has been cultivated as a garden tree in most of the tropical and sub-tropical regions of the world. It has stout, succulent-like stems and branches that are topped with lance-shaped leaves from spring to autumn, and it produces copious amounts of fragrant flowers in terminal clusters for months on end.

The leaves and stems of the Frangipani exude milky sap if the plant is cut or damaged. The tree grows easily from cuttings (truncheons) taken from the parent tree during the dormant winter period. These need to be left for a few days for the sap to dry before planting. P. Rubra belongs to the Dogbane family – botanically referred to as the Apocynaceae family.

The flowers occur in a wide array of spectacular colours, from almost white through shades of pink, yellow and apricot, to dark maroon and shades of wine, and many have prominent yellow throats.

All are deliciously fragrant – one of the main reasons it has traditionally been cultivated in gardens, as street trees and in temple grounds and cemeteries. The rich, heady fragrance of the blooms is particularly pronounced in the early evening, lending a distinctly romantic air to a garden.

The sturdy trunks and swollen branches of this statuesque tree are covered with pale grey bark. Being deciduous, it is bare limbed in winter and forms a striking silhouette in the landscape. The trees can grow to 7 or 8 metres tall and have a wide spreading growth habit, with branches extending down to almost ground level if left un-pruned.

Easy to grow and requiring little or no attention, Frangipanis flourish in almost all soil types, from sand to clay, and they cope with a wide range of pH levels – both acid and alkaline. They grow best in full sun although many can be found in dappled or light shade in mature gardens.

In South Africa frangipanis are found growing in many gardens – from the Western Cape all along the coast and extending inland to most of the warmer regions. Lately they seem to be somewhat out of vogue, with few being grown and offered for sale in nurseries, however, the new hybrids that are making their way to our shores may well resuscitate their popularity. Some of these hybrids have huge individual blooms, reaching 7 to 8 cm in diameter, whilst the colours of others are strikingly beautiful. The magnificent photographs illustrating this article make an attempt to highlight just how spectacular they are – and what a far cry from the usual cream- and pink-flowered forms that were planted extensively a century or so ago.

Another of the Plumeria species is the white-flowering Plumeria alba, commonly known as West Indian jasmine, which originates from Puerto Rico and parts of the West Indian islands. The numerous garden hybrids enhance the range and variety of frangipanis to the point that they have become a most collectable group of garden plants. If you have a large enough garden and you live in a climate where they grow well then begin collecting them now – you may be astounded to find out just how many different frangipanis there are.