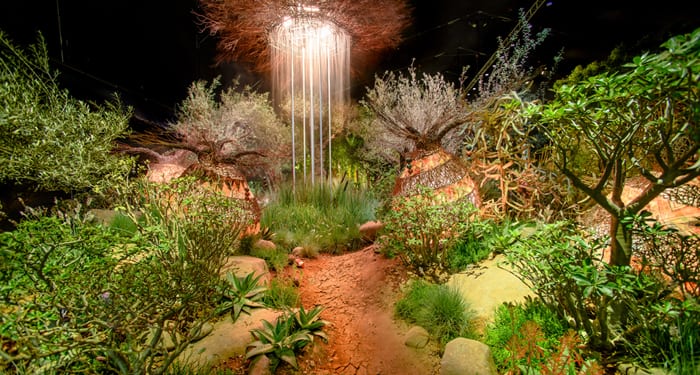 A South African designer took the Singapore Golden Show by storm with his creative show garden.

Thunderclouds roll over the dry savannahs, lightning transforming the sky into a riot of colour and streaks of fire. The rain brings life to the dry landscape, the sandy soil greedily soaking up the precious liquid. The big bellies of the oldest and wisest members of the bushveld, the baobabs, swell rapidly as they suck up the rain, which must last them through seasons that could well pass without a drop of rain. The rain also triggers an explosion of colour on the savannah, giving life to the otherwise dry landscape, and once again Africa sings her song all around you. She makes youmove to the rhythm of the African heartbeat, the beat that gives life to all – African thunder.

‘African Thunder’ was the theme of my garden at the 2018 Singapore Garden Festival, an event held every second year in one of the best botanical gardens in the world, Gardens by the Bay. This is the world’s biggest flower and garden design show, and the city of Singapore invites the world’s most renowned landscape designers to put on a show of design excellence that attracts over 600 000 garden enthusiasts from around the globe, to visit the show gardens and also interact with their favourite designers. The show gardens are divided into two sections.

The first is the outside show gardens, which are practical and suitable for a home garden setting. But the main attraction is a fantasy section, housed in a huge five-storyhigh marquee that is completely blacked out. It’s so dark that you can’t see your hand in front of your face, and it is in this challenging environment that my garden was showcased.

You are given a 10 x 10m area to create a display that must evoke emotions in visitors, incorporating lights, sound and, of course, loads of plants. Show gardens take about a year to plan, but we only have eight days to build them. The prestige of winning the Golden Tree award at this event is immense and very sought after, so the pressure to perform is intense. The world is fully represented at this show, from the UK to the USA, Australia, Japan, Singapore, Malaysia, Canada, France, China, Russia, Ireland, South Africa and many more countries.

My biggest challenge was to get hold of plants native to Africa to use in the landscape, which is easier said than done. I also managed to source big 70-year-old olive trees (not native to South Africa) from Barcelona, Spain, and ship them all the way to Singapore. They had immense character and presence, which was needed to add height and volume. I had a variety of grasses and shrubs grown in Kuala Lumpur, Malaysia, from seed sent over the year before.

The succulents, such as big, fat-bellied impala lilies and euphorbias, were sourced mostly in Bangkok, Thailand. I spent many sweaty hours in colourful taxis, stopping at every possible small nursery that I saw under tall coconut palms to sniff out those interesting green gems for the garden. The biggest challenge when it came to the hard elements was to create the main feature, a floating thundercloud made out of dry sticks, high in the air and 5m x 5m in circumference.

The cloud also had to house massive show lights with lightning effects and water pipes, so that it could ‘rain’ onto a savannah of grasses and bulrush sculptures. A dry, cracked riverbed was created by rolling clay flat onto the ground and using a flame torch to crack and burn the clay in situ, without burning down the tent.

Africa would not be Africa without baobab trees, and so I felt I had to feature them in the garden, but to find baobab trees in Singapore or anywhere close by was impossible. Instead I decided to sculpt some and use them both as a cultural and lighting effect in the garden, by constructing them out of roots and rice paper.

The rice paper was painted with traditional Zulu basket patterns highlighted by the lights inside the trees, and carved monkey apple seedpods that I took with me from SA were used as colourful baobab seedpods on the trees. The South African Melinis nerviglumis grass created the softness needed to ground all the hard elements and sculptures, the Adenium plants (impala lilies) linked to the shape of my baobab sculptures, and the Euphorbia ingens subtly created the sense of extreme heat and drought associated with Africa.

For a fantasy garden, lighting and sound are the most important tools that we designers have to tell our story. My story began with the cloud erupting in bright lightning flashes accompanied by ‘thunder’ – the sound of traditional African drums breaking the silence in the huge tent. This immediately caught the attention of the audience, and was followed by mist and colder lights to start the tale in a crisp early African morning setting.

Then, as the beat of the drums increased so the baobabs’ lights turn warmer as the African day heated up. The music became louder and the lights then started to move with the rhythm of the beat as night approached over the African landscape. ‘African Thunder’ achieved my goal: to catch and hold the imagination and attention of the audience. It was awarded the Golden Tree for best horticultural use in a landscape, and also won overall Best on Show. Africa will definitely be back in 2020 to defend its title for a third time at the Singapore Garden Festival.