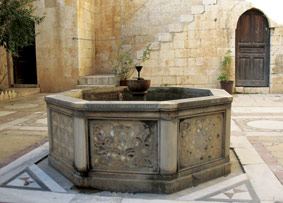 When the Muslims first entered Persia 14 centuries ago, they discovered a sophisticated courtyard garden culture that had its origins in ancient Egypt.

Paintings in Egyptian tombs depict walled gardens criss-crossed with irrigation channels and planted with fruit trees and vines. In Persia, these same elements formed the basis of the classical chahar-bagh, or fourfold garden, so called because of its formal quadripartite structure centred on a central pool or fountain. Extending from this fountain and dividing the garden into four equal parts were four straight streams, reminiscent of the agricultural irrigation channels found in ancient Egyptian gardens.

The Muslims who first encountered this formal garden style were reminded of the verses in the Quran that described paradise – or heaven – as a garden. While this concept of heaven is also found in both the Torah and the Bible it is in the Quran that paradise is most precisely pictured as an enclosed garden “underneath which rivers flow”, where there shall be “repose and peace” for the faithful in shaded groves of abundant fruit trees.

It is not surprising, then, that the gardens based on the chahar-bagh design were quickly adopted and developed in the Islamic world and soon cities such as Damascus were endowed with many beautiful examples of them. These gardens assumed a special spiritual space in the Muslim psyche and became prime examples of inward-looking sacred art, places in which to remember God even as they were also living spaces where families and their friends relaxed, socialised, ate and made ablutions.

‘Outside Rooms’ in old Damascus

The traditional courtyard gardens of Damascus are some of the most beautiful of their type in the world. Famed in the ancient world as a bountiful city of orchards, Damascus was built in a lush oasis fed by clear streams gushing down from the surrounding mountains and it became an early centre of the Islamic world.

Unfortunately little remains of this greenery nowadays, except of course in the domestic courtyard gardens that have survived in old Damascus, and what jewels these are! Ranging in size from a mere 5 x 5m in humble dwellings to a grand 25 x 20m in palaces, these courtyard gardens perhaps exemplify the original ‘outside room’ concept that is becoming so popular today.

The English word ‘paradise’ comes from the Persian ‘pairidaeza’ – ‘pairi’ meaning ‘around’ and ‘daeza’ meaning ‘wall’. Enclosed by the walls of the house (or palace), the private courtyard garden was essentially the hub of the home, the place to relax outdoors in a cool, sheltered environment that revived the body, spirit and soul.

Care would be taken to position the seating area in that part of the courtyard that was shaded from the summer sun. In larger courtyards trees also provided shade. In a very real sense, the courtyard garden also functioned as a living lung: purifying and cooling the air in the core of the home – a masterful meeting of form and function!

Symbolic Gardens of the Soul

Besides shade, the other crucial element in a Damascus courtyard garden is water. In keeping with the classical chahar–bagh form, a still pool or gurgling fountain is always found at the centre of the courtyard. Not only does the presence of moving water cool the air, it also – more crucially – imbues the garden with profound spiritual symbolism.

In Islam, as in Christianity and other religious traditions, water symbolises life, purity and spiritual rebirth. It is easy to understand how this association developed when you consider how arid most of the Middle East is, and how oases literally represented survival in the desert. For this reason even the most humble fountain will remind the faithful Muslim of the paradise promised in the afterlife, and will invite spiritual introspection.

Indeed, the entire structure of the chahar–bagh form is designed to do just this, and it is no co-incidence that the fourfold garden is based on a number that has profound spiritual significance in Islam. Four is the number of directions in space, the number of seasons and the number of elements in creation. The formal significance of the fourfold garden is further emphasised by the extensive use of geometric and arabesque (repetitive, interlacing) decorative forms, both in the shape of the central pool or fountain and in the patterning on the walls and floors.

Traditional Islamic art is characterised by the use of these abstract patterns for the simple reason that it is believed that the Divine Unity of God cannot be represented ‘realistically’, but only through abstract designs which intimate the profound mysteries underlying the surface of creation.

“The real gardens and flowers are within, they are in man’s heart, not outside”
Rumi, The Masnavi, Bk IV

Courtyard garden plants are overshadowed by the hard geometric elements, however, this does not mean they are unimportant. They are used to soften the space and provide a degree of informality in an otherwise very formal garden. Preferred plants are usually edible (in the form of fruit trees and herbs) or fragrant, but those that provide a feast for the eyes are also included.

Besides being practical gardens that feed the soul, they are also gardens that feed the senses, even in the most subtle of ways. The soft gurgling of the central fountain calms the spirit with ‘white sound’, the touch of cool water refreshes it, the fragrance of roses and jasmine lifts it, the taste of sweet fruit nourishes it and the sight of exquisitely formed flowers excites it to a higher plane.

There are many lessons we South African gardeners can learn from the traditional Damascus courtyard garden. Perhaps of first importance is the way they can remind us that form and function should be perfectly balanced in any good garden design: a living garden is something truly lived in by people, an important part of the home and not a decorative afterthought.

In sunny South Africa we have wonderful opportunities to bring the outdoors inside by using patios, courtyards and gazebos, to create ‘outdoor rooms’ in which we can entertain or relax by ourselves, to make our gardens truly functional parts of our homes. Now that more and more of us live in high density, and hopefully more secure housing developments, the need for privacy in our gardens will surely also increase.

Again, the classical Damascus courtyard garden, which was designed to create a private oasis for the family, is surely instructive and inspirational. Lastly, let us never forget that the truly living garden is also always a place of spiritual nourishment.