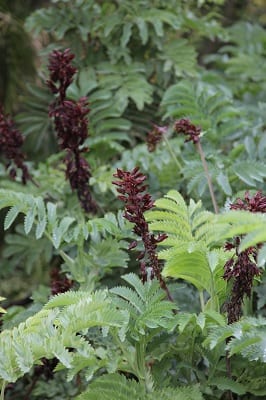 The Honey Flower is a bushy evergreen shrub that can grow up to 2 metres high is known mainly for its large, ornamental grey-green leaves and distinctive clusters of flowers that vary in colour from rust red, brownish maroon to purplish red. The English name ‘Honey flower’ is derived from the Greek meli (honey) and anthos (flower), which arose because the flowers secrete a surprisingly large amount of rich nectar from which an excellent honey is produced.

On the other hand the descriptive Afrikaans name ‘Kruidjie-roer-my-nie’ (literally: ‘little herb touch me not’) refers to the unpleasant odour that is given off when leaves or branches are bruised or broken. It is interesting to note that the vernacular name has been used since about 1700, when the plant was cultivated in Holland for its medicinal properties. Melianthus Major occurs naturally only in the Western Cape, while Melianthus Comosus has a wider distribution throughout the drier regions of South Africa.

The foliage of both these species is highly toxic; an animal which browses on the leaves will die within a few hours. The roots are also reported to be poisonous. Due to its toxicity Melianthus must never be taken internally, however, used externally it is one of the most widely known and extensively used traditional indigenous medicinal plants. Poultices made from fresh or dried and powdered leaves, applied directly to the affected area, were highly regarded as an effective treatment for all types of wounds, sores, bruises, burns, ulcers and ringworm. A hot or cold compress of fresh leaves was also used to relieve muscular pains, backache and rheumatism.