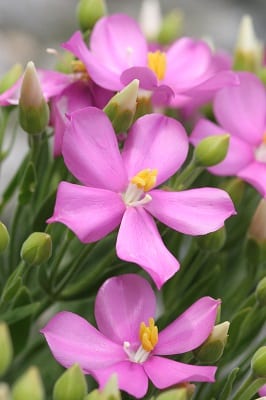 Orphium Frutescens is a small, erect-stemmed shrub (growing to 90 cm tall) with bright green, leathery leaves. It is the only species in the genus Orphium, and is also the most well known of our indigenous gentians.

There are also two very attractive pink and white flowered cultivars, selected by horticulturist Gary Shanks, and named ‘Aurora Lights’ and ‘Cupid’. Orphium Frutescens is native to marshes and seasonally moist sandy flats along the Cape west and south coasts.

It produces a profusion of large, shiny, pink or occasionally white flowers with prominent yellow anthers, from November to February, with a peak flowering period in December and January. The long-lasting blooms always command attention when planted in dense groups and it is very effectively inter-planted with the Restio Elegia Tectorum, and with Erica Mammosa, which flowers at the same time of year.

Orphium Frutescens needs regular heavy drenching in winter, but once established it is remarkably water wise. Its flowers attract numerous beneficial insects to the garden, including honey bees and carpenter bees. Plants are easily propagated from fresh seeds that germinate readily in spring, or from tip cuttings taken in autumn.