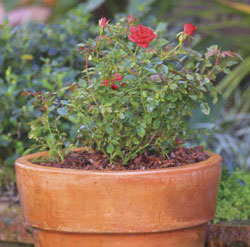 Roses don’t need to be re-potted that frequently because they have the ability to regenerate themselves. In winter the many hair roots die and decompose creating natural compost. It is usually very clear when roses do need to be re-potted. They don’t flower or grow as well, the leaves may have a yellow, underfed look and they may also be more prone to disease. This will be due to the fact that the soil in the containers is depleted or has become hard and there is not enough aeration around the roots. Generally, roses can be re-potted every three years and it may also become necessary if a rose has outgrown its container.

An alternative, when it is too awkward to re-pot a particular rose, is to push a strong stick into the potting soil several times, wiggling it around to create tunnels. Fill the tunnels with compost or an enriched potting soil mix. This process also opens up the soil and allows the air and water in.

The potting mix for roses needs to be quite rich. A special potting mix that consists of soil, peanut shells, clinker ash (for aeration) and well-rotted horse, chicken and pig manure is available from all Ludwig’s Roses outlets. If you don’t have access to it, you can make up your own mixture. It should consist of one-third soil, two-thirds coarse organic material plus bone meal or superphosphate. If you use sandy soil then also add a water-retaining material. The organic material can consist of a mix of peanut shells, coarse outdoor potting soil, rough homemade compost or the fibrous material obtained by soaking compressed palm peat bricks.

The rose will start growing but the leaves will not lead to new blooms and it will need pruning in July.