Home » The Gardener » Getting to Grips With Galls 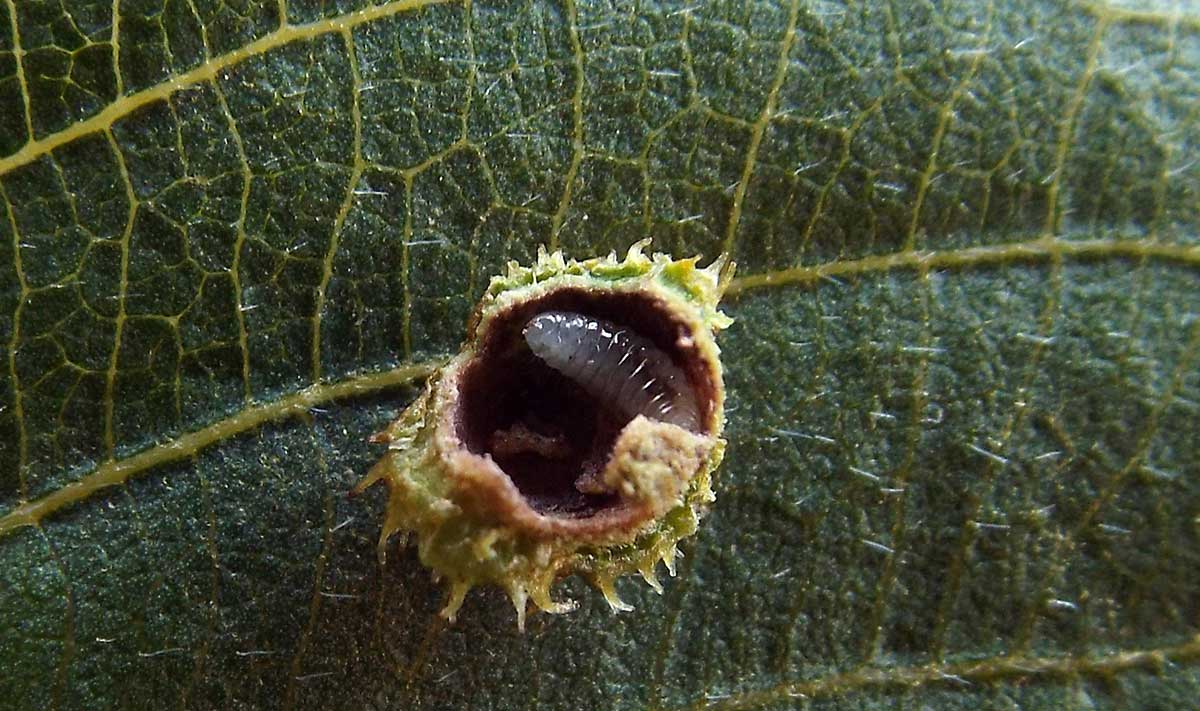 Getting to Grips With Galls

Plant galls may be unsightly, but they’re no reason to panic!

Abnormal growths in plants can usually be attributed to the formation of galls. Galls can form on any part of the plant, from the roots to stems, flowers and leaves, and usually appear when the plant has been attacked by bacteria, viruses, parasites, fungi, mites, nematodes or certain insects. Alternatively, they can often simply be an abnormal growth in the plant’s cell structure – a bit like cancer in a mammalian cell.

We notice galls because they appear as unsightly growths on the plant, and we immediately suspect them to be harmful. It is true that they are unsightly and that they interfere with the normal functioning of the plants growth, but seldom do they pose any real threat to the plant’s health, unless the growth is extensive. Leaves that suffer serious cover may be unable to photosynthesise and could eventually die and fall off. Also, growth beyond the point of a gall on a twig might stop, and some plants may exhibit stunted growth, because the gall is tapping into vital nutrients that the plant needs during the growing phase. If a large number of galls are present on a young plant it may suffer considerably more than a mature one.

Rather bizarrely, some galls can actually be quite attractive. A Cynipid wasp found in America produces a gall resembling pink and white fluffy candyfloss.

How are galls formed?

It would be beyond the scope of this article to cover all scenarios that may give rise to the formation of galls, so I will just give a brief overview of those resulting from interactions with insects, as these are more common.

As a rule, a gall forms when an insect or mite feeds on the plant or lays its eggs inside it. The insects/mites responsible for this damage are often so tiny that they are difficult to spot, so the damage can be inflicted long before any visible signs begin to show themselves.

The gall is formed after the insect/mite causes either mechanical damage (egg laying), or as a result of the introduction of saliva into the plant by the adults or their larvae as they feed. In the case of saliva, this acts as a stimulant, increasing the plant’s normal production of growth hormone. This hormonal increase occurs locally, resulting in an escalation in cell size (hypertrophy), and/ or an increase in cell numbers (hyperplasia).

It is where these increases occur that the gall forms. After the gall’s formation it not only offers protection to the larva, but also an easily accessible food source.

Gall-forming insects can be broken down into two types, depending on the structure of the gall (closed or open). Insects with chewing mouthparts such as wasps live in closed galls and emerge following pupation through a hole they have chewed in the gall.

Those with sucking mouthparts, such as aphids (not all aphid species form galls), live in open galls. These galls split open when the time is ready for the aphids to emerge. An entire colony of aphids may live within these open galls.

The gall’s shape is determined by the particular chemical that the insect releases while inside the plant. As well as producing these growth-stimulating chemicals, many gall-forming insects also release an enzyme that converts the plant’s starch into sugar. This can often be seen oozing from the gall in the form of honeydew, which is sometimes harvested by ants.

As a rule, gall-forming insects attack plants during their growth phase when nutrients and cell division are at their highest. Galls seldom form in mature plant tissue. Once inside, as the organism begins to grow and feed, the gall begins to swell. Even after the organism has pupated, the gall may continue to grow, although there will obviously be a natural limit as to how large it will reach.

Galls are so species-specific that it is possible to identify the culprit that made them without actually seeing the offending organism. Some galls are even tissue specific, attacking specific areas of the plant.

Organisms responsible for the formation of galls are many and varied but typically include gall midges, gall wasps, gall flies, psyllids (jumping plant lice), Eriophyid mites, some sawflies, certain beetles and some aphid species.

A number of these organisms may overwinter on the host plant and then attack it becomes spring. For this reason, it’s an option to spray plants that are highly susceptible to galls with a broad-spectrum insecticide just before the onset of winter, to kill any stragglers.

As mentioned, galls don’t usually adversely affect the plant’s health, so the best thing to do is leave them alone. Although chemical applications are possible, these seldom prove effective unless they are administered at precisely the same time as the insects/mites are around. Once the gall has begun to form it offers protection to the intrusive organism and spraying will have little effect.

Plants that are not entirely healthy tend to suffer more from gall formation. Cultural control is therefore in the plant’s best interest, including adequate watering, fertiliser application and correct pruning.