Home » The Gardener » Slugs and snails 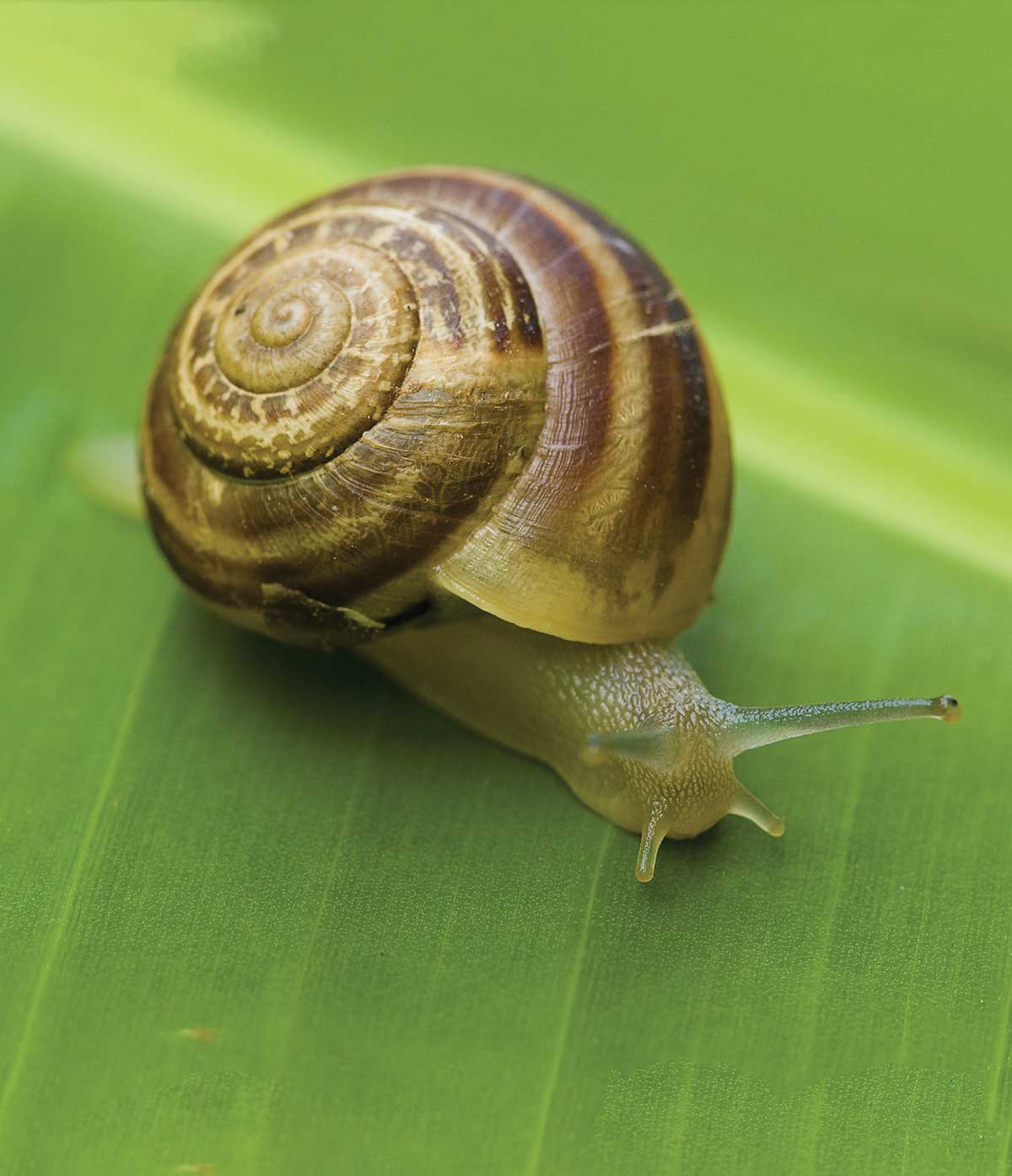 Mitigating the menace of marauding molluscs.

Slugs and snails are the bane of the gardener, and also wreak havoc on a host of agricultural and horticultural crops. These common pests are classed as gastropods in the mollusca (mollusc) phylum that also includes squid, cuttlefish and octopuses, as well as others.

The only difference between a slug and a snail is that the snail has a spiral shell into which it retreats. Other than the presence of chewed plants, one of the tell-tail signs that slugs and snails have been marauding in your garden is the silvery mucus trail they leave behind. The mucus is secreted by the muscular foot, to aid its movement. Slugs and snails are hermaphrodites; that is they have both male and female sex organs, so anyone individual you may find has the potential to lay eggs.

The eggs are laid in clusters in the soil, beneath leaves or in other areas where the soil is damp. They may be opaque, white or yellowish-brown in colour. Depending on the species, several clusters may be laid during the year. The eggs take 1 – 2 weeks to hatch, depending on the species, but may lay dormant in the soil for months and hatch only when conditions are suitable.

These marauding molluscs are nocturnal by nature, emerging under the cover of darkness to feast on decaying matter, living plants, flowers, ground fruits such as strawberries and tomatoes, citrus fruits and even the young bark of trees. Evidence of slug or snail damage is large, ragged holes chewed in leaves, leaves with scalloped edges, or seedlings that have been completely stripped of their leaves and reduced to a bare stem.

Slug and snail control can be broken down into several approaches: Mechanical This may be the most laborious process as it involves searching for the slugs and snails in their hiding places, but it is extremely effective. Search at night with the aid of a torch and kill the slugs and snail by dropping them in a bowl of soapy water, and then dispose of them.

There are a number of different barriers available, but one of the most effective is to ring the vulnerable plants with a copper screen, such as copper tape. The copper reacts with the slime that the slugs and snail produce, and creates an electric charge that deters them from crossing. The screen should be at least 10cm tall. The only downside to using copper is its value to opportunistic thieves, and so is perhaps more appropriate in an enclosed environment such as a poly-tunnel or greenhouse. A ring of silver foil will also act as a deterrent. A mound of dry ash 3cm high and 7cm wide spread around the crop will also act as an effective barrier, as will diatomaceous earth spread around the plant’s base. The problem with barriers is that while they may prevent slugs and snails entering, they do nothing for those that are already inside it. Therefore they should be used in conjunction with other control systems.

A range of chemicals and baits can be bought from garden centres to deal with slugs, and most are extremely effective. I have, however, read conflicting accounts of using neem oil on slugs and snails – some accounts report that it doesn’t work while others have shown a positive outcome. I haven’t tried it myself, so can’t side with either opinion. I suspect it would be used as a repellent, due to its bitter taste, and act to disrupt the gastropods’ feeding senses.

Be aware if you use baits containing metaldehyde and carbaryl as these can be extremely toxic to earthworms and many surface predatory insects. Metaldehyde is also toxic to cats, dogs and birds. If you do decide to use metaldehyde baits, know that they are more effective on a warm day when humidity is low. When ingested, or when they make contact with the pest’s body, death occurs within 24 hours. The ground should not be watered for 2 – 3 days following placement of the bait as this can reduce its effectiveness. However, it should be watered prior to bait dispersal as this will make the slugs and snails more active. The bait should also be placed in shady areas as it can deteriorate in direct sunlight. An alternative to metaldehyde is iron phosphate baits, which are safer for wildlife and domestic animals.

A few natural predators feed on slugs and snails, including monitor lizards, some snakes, toads, predatory beetles, birds and nematodes. If the plants are robust enough, chickens, ducks and geese will also keep slugs and snails under control. Other methods Scatter bran around seedlings and vulnerable plants. When the gastropods ingest it it will swell in their stomachs and kill them.

Another tip is to smear petroleum jelly around the rims of seed trays to prevent the slugs and snails from climbing up them. Sunken traps containing beer are well publicised, but you are better off drinking the beer and filling the traps with sugary water and yeast, which is as effective. Such traps are indiscriminate, though, and beneficial insects may fall into them.