Home » The Gardener » Flavours of Christmas 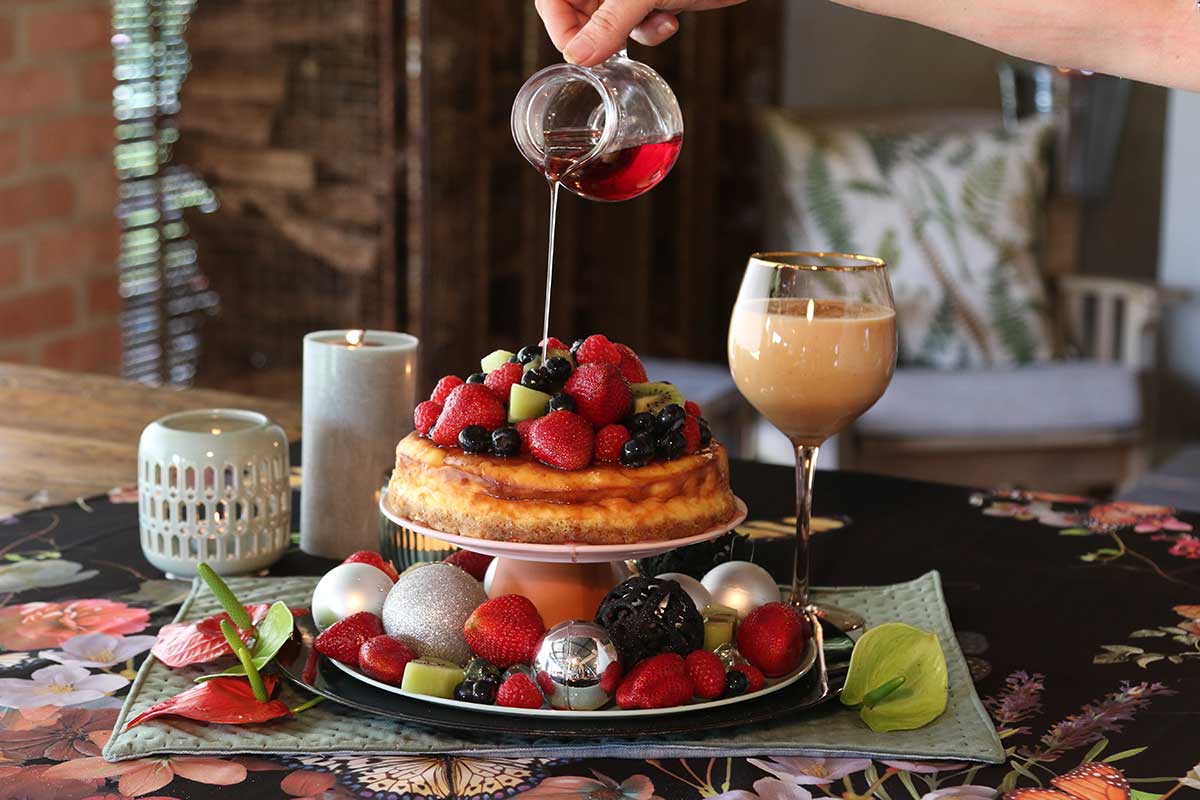 Enjoy our toast to the festive season with some décor ideas and enticing recipes.

One of the things that gives you that Christmas feel, other than the decorations and audible carols, is the smell of spice in the air. As soon as the gammon goes into the water with cloves and bay leaves, Christmas is near. We have gathered some décor ideas and festive recipes that represent what’s fresh for the season, and what tastes like Christmas.

A Cranberry Christmas Cocktail scented with pine is the perfect start to the celebrations. The addition of pine (we used juniper) gives a gentle ‘fir-tree’ taste, but it’s more about the decoration and the aroma than the flavour. While most pine and fir trees are edible, there are a few that are toxic. Make sure you avoid hemlock, Norfolk pine, Australian pine and Ponderosa pine. If you’re not sure what fir tree you’ve got, use rosemary as a substitute.

Make a syrup from the cranberry juice and sugar. Heat both in a saucepan and boil for about 30 minutes. Keep an eye on it – at some stage it can reduce very quickly and become too brown, losing its bright red colour (and you don’t want that to happen). Once it has reduced you can bottle the syrup and refrigerate it for use later. To assemble, add some syrup to a champagne glass and top with sparkling wine, a few cranberries and a sprig of pine.

Whether you choose the traditional turkey, chicken or beef burgers, the addition of some spicy sauces from the below festive recipes makes Christmas burgers shine. We used chicken breasts, cut in half lengthways, crumbed and shallow fried until cooked through. To assemble the finished burgers, cut the buns in half and toast slightly on the cut side, add fresh lettuce leaves to the bottom bun, top with cranberry onion relish, add the chicken breasts and top with the bread sauce and finally the top of the bun. For an extra touch, wrap bacon around cocktail pork sausages, grill until cooked and skewer onto the top of the burger halves.

Melt the butter in a saucepan and add the onions. Cook gently until soft. Add all the other ingredients and stir until the sugar has dissolved. Simmer for about 30 minutes until the mixture has thickened. As it cools it will thicken more. At this stage you can pack into sterilised jars and refrigerate when cooled, ready for the big day.

Traditionally served with turkey, this very English sauce is Christmas in every spoonful. For the best results, infuse the flavours into the milk early, but prepare the final sauce just before serving.

Pierce the onion with the cloves. Place the milk in a saucepan and add the onion. Heat until boiling, then remove from the heat and set aside to infuse for at least an hour (this can also be done the day before). When ready to serve, remove the onion and heat the milk again. Add the breadcrumbs, salt, pepper and cream, and stir till thickened – this should only take a few minutes. You can also use a stick blender to make a smoother sauce. Serve immediately.

Some of us still make a jelly mould salad for the festive season. This retro festive recipe can be a grated carrot jelly, chopped cucumber for a green look, or even a tomato aspic for red. Try this updated version as an entrée for your next party: a combination of the traditional seafood cocktail and a jelly salad that is surprisingly tasty and really good looking in a glass. This recipe serves four people.

Make the jelly as per the packet instructions. Pour into glasses that have been placed at an angle in a muffin tin in the fridge, making sure they are all the same angle and filled with the same amount. Leave in the fridge until set. Mix together the ingredients for the sauce. Chop the crab sticks and add, cook the prawns in a pan (or steam them) and add. Mix well and place in the fridge until ready to assemble. Spoon into the jelly glasses and top with microgreens and edible flowers to serve.

Eggnog is reputed to date back to the 13th century. Milk, eggs and sherry were foods of the wealthy, so eggnog was often used in toasts to prosperity and good health. It’s like drinking boozy custard and can pack a punch. While it is tasty as a drink, it is delicious in a cheesecake!

This version cooks the eggs, which means it can last in the fridge up to 2 weeks (if you hide it!). This makes about 750ml.

Heat the milk, cream, sugar and spices until just about to boil. Beat the eggs together and slowly beat into the milk. Stir until thick, then add the alcohol and mix well. Strain the eggnog through a sieve into clean sterilised bottles and refrigerate until ready to serve.

Line a springform tin with baking paper. Mix the biscuits with the butter and line the base of the tin, pressing down and making an even base. Place in the fridge until the mixture is ready. Beat together all the filling ingredients and pour into the pie shell. Place the tin on a grid in a baking dish and add water in the bottom to just below the tin for a bain-marie. Bake for 40 – 50 minutes at 180°C or until the cheesecake is set. Cool. When ready to serve add the fresh fruit that has been glossed with a bit of syrup.