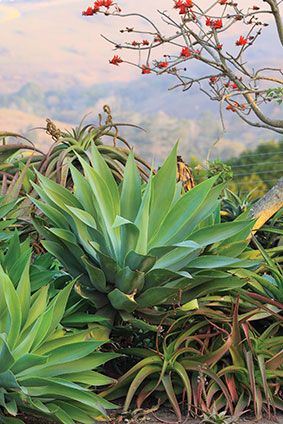 Still one of our all time favourite plants, originating from Mexico. Multiple rosettes of large, sharply pointed, grey-green leaves emerge from a stem that often lies flat across the ground. As each rosette of leaves matures, usually after 4 to 5 years, an amazing floral spectacle emerges in the form a flower spike 3 metres or more tall.

They are sometimes curved or bent like a swan’s neck, hence the common name. Each spike bears hundreds of individual flowers that are creamy-green in colour. They make an elegant and clean looking container plant for sunny positions in frost-free gardens and are also effective in flowerbeds and rock gardens where they form large clumps up to 2 metres in diameter.

Agave attenuata is easily one of the prettiest of these succulents. Its large rosettes are formed from soft, fleshy, thorn-free leaves of a light, mint-green hue. It lends a cool, tropical appearance to a garden and is often planted close to a swimming pool or alongside rustic garden steps or paths. The root system is shallow and small, but the plant is nevertheless able to cling firmly to the soil on a slope or to anchor itself easily between the roots of large trees.
It has many other good characteristics too, including that it grows easily from cuttings that you simply stick in the ground, and that it grows in full sun, but also in relatively deep shade. It is exceptionally drought hardy and besides the fact that snails love to feast on its juicy leaves, there’s really nothing else to worry about. It blooms once, at the end of its lifetime, in the form of a very long stem covered in soft yellow flowers. The weight of the stem itself and the flowers it carries causes it to bend in a graceful arch towards the ground, which accounts for its common name swan’s neck. This species is a generous monocarpic plant that produces many runners (baby plants) at the base of its stem and is able to cover a large area relatively quickly.
With an increasing awareness of the need to conserve water, gardeners have started to appreciate tough plants that require very little water. Many are seen reducing the size of thirsty lawns and sometimes even replacing them with stone gardens, rockeries or containers. At the same time the concepts of low maintenance and minimalism are being put into effect by professional landscapers, and the rest of us can all learn from them. Of particular interest here is the way they have begun to re-introduce the almost forgotten agave species and cultivars in their new garden designs. Agaves are monocarpic, which means they only flower once and then die. It is not the flowering that causes the plant to die, but changes within the plant brought on by the production of fruit or seeds. In some species, the ‘mother’ plant waits until several offspring have become established around her before she produces her tall spike of nectar-rich flowers. In others, a bulbil (plantlet) develops at the base of each flower, and these bulbils take root when they fall. Agaves are generally slow growing and can take many years before they are ready to flower, but this is not a problem because they have a place in ornamental gardens for their form, and not their blooms. Agave is a diverse genus when it comes to shape, foliage colour and texture, but a common characteristic of these succulents are the rosettes of thick, heavy leaves. Generally, the leaves of all the species end in sharp points, while those of some species also have thorny edges. Gardeners who have to deal with very hot and dry summers especially value the prettiest types of agave, such as Agave attenuata, A. geminiflora, A. parryi and A. victoriae-reginae. They are particularly striking in elegant garden pots, in rockeries and in uneven groups planted in a pattern in stone gardens.

Most suitable climate
Agaves prefer hot, dry summers and moderate winters. Heavy frost and extreme cold will damage them.
What they need
Location: full sun to light shade. Very suitable as low-maintenance container plants.
Soil: sandy, well-drained soil or a commercial potting-soil blend suitable for succulents.
Water: only water if the soil is completely dry, and even then you can wait a day or two. Too much water can cause root rot or cause the leaves to become pale and flop.
Ponder upon this
Within the genus Agave, some of the species (such as A. americana and A. sisalana) that were planted in days gone by in parts of South Africa outdid themselves and now appear on the invasive vegetation list. They were imported from the arid regions of Mexico and tropical America (where the local population put agaves to a multitude of uses, from medicinal to functional to making tequila) and planted in the desert regions of the Karoo as fodder for cattle, and to prevent soil erosion, form secure hedges around cattle pens and provide nectar for honey production. These plants, while fairly harmless in desert landscapes, are practically indestructible and, when they escape to temperate and subtropical climates with high rainfall, they become a serious threat to the natural habitat and its biodiversity.
In a nutshell
* Interesting collectors’ plants for containers.
* Exceptionally drought resistant.
* Prefer warm places.
* Attractive in desert landscapes and rockeries.