Home » The Gardener » All about ants! 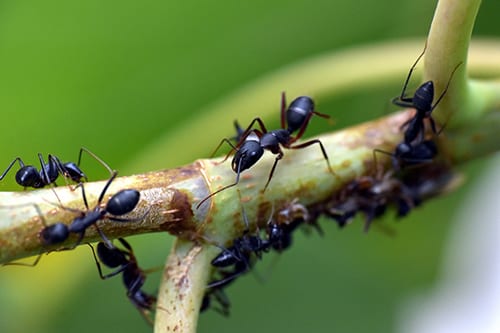 Although the presence of ants may be an irritation to a gardener the ants themselves rarely cause extensive harm to plants. It is only when they are protecting significant quantities of sucking insects from attack by their natural enemies that control measures may become necessary. Some of the most common ants found in the home garden are pugnacious ants, Argentine ants, red ants and brown house ants.
Pugnacious ants
Known for their aggressiveness, pugnacious ants will attack humans and animals when disturbed. They feed on the honeydew excreted by sucking insects and their presence in and around plants is responsible for an increase in sucking insect populations such as mealybug, scale, aphids and other honeydew-secreting insects. By carrying young scale around they are partially responsible for the spread of scale infestations. The openings to the underground nests of these ants are easily visible in the soil; activity occurs mainly from early spring to late autumn, with peaks in October and again from December to March.
Argentine ants
Argentine ants tend to be aggressive towards other ants and sometimes invade their territories. They feed on honeydew excreted by sucking insects. They interfere with the parasites and natural predators that would otherwise be able to provide some degree of biological pest control. They are especially associated with mealy bug infestations on grape vines. They nest in the ground and are active in summer and autumn and relatively inactive in winter, except for warm, sunny days.
Red ants
As they feed on other insects, red ants are considered to be one of nature’s biological controls. They are found on lawns and under buildings all year round, with activity peaking in summer and autumn.
Brown house ants
Nesting in and around buildings, brown house ants enter our homes through any available crevice. They cause no direct damage but end up in sugar pots, jam jars, kettles and other foods. They can be a nuisance all year round but most activity occurs during summer and autumn.
Methods of control
Ants play an important role in the garden ecosystem.  As mentioned above, the main reason one would want to control them is to prevent them protecting insect pests such as aphids, mealy bug, scale and other insects that secrete honeydew. With the ants controlled at ground level the natural predators and parasites are free to play a role.

The most effective way of dealing with ants is to flood their underground nests by pouring a formulation containing natural pyrethrins down the entrances. This is not always easy as some nests have very small entrances; an alternative is to spray along the trails the ants form between the nests and host plants. Often it is simply enough to move ants away from plants where they nest amongst the roots by pouring repellents such as garlic juice extract down the nest entrances. With species such as the Argentine ant you also need to prevent the worker ants from gathering food for the ant larvae that are still in the nest. This can be done by coating the lower stems or trunks of the plants with one of the recommended formulations.
Last but not least, make your garden wildlife friendly: birds and cold-blooded creatures such as lizards, chameleons, frogs and ant lion larvae feed on certain ant species.

Johan Gerber’s book, The Garden Guardian’s guide to environmentally-responsible garden care (ISBN 9780958478557), contains a wealth of information on dealing with garden pests. It is available at leading bookstores.