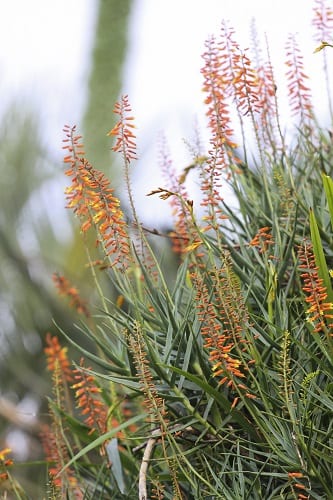 Nowadays indigenous aloes and succulents are to be found in many suburban gardens. Some are able to cope with a diversity of climatic conditions and thrive, but others, unable to acclimatise to high rainfall conditions, eventually succumb when a period of prolonged wet weather is experienced. One aloe species that seems able to thrive in most climatic conditions encountered in South Africa is ALOE tenuior, commonly known as the ‘Fence aloe’. It is becoming more and more popular as gardeners begin to appreciate the value that it adds to landscapes. I recall that as a child we had one growing in the family garden; it was duly removed for being untidy and of little beauty or interest. Isn’t it amazing how perceptions and values change over a relatively short period of time?

Growth habits
ALOE tenuior has a natural distribution in large areas of the Eastern Cape, ranging from just above sea level to altitudes in excess of 2000 metres. Sparse populations are found in parts of southern and northern KwaZulu- Natal. Often described as a rambling or climbing aloe, in nature the plants develop into bushy clumps of long, lank stems that can attain lengths of three metres if they have a means of support. In gardens, however, plants are usually kept neat and relatively compact through regular pruning and allowed to grow to about a metre tall. The leaves are narrow, sharply pointed with ­ ne teeth along the margins and form rosettes of grey green foliage atop the thin stems. Flowers are borne in slender racemes during winter, late spring and into summer – a real bonus because very few aloes have such a long ‑flowering period. Flower colours vary, ranging from yellow through shades of orange to almost red. Individual ‑flowers are approximately 15 to 20 mm in length, narrow and tubular, and produced in varying densities on the infl‑orescences.

Garden uses
Plant A. tenuior along fences and boundary walls to lend colour and break the starkness of these structures. Use it on hot dry banks to help stabilise soil and, because it can thrive with little or no care and attention nor any supplementary watering, let it fill up the spaces in the more neglected regions of the garden. It grows in full sun and dappled shade and adapts to most soil types. It is propagated by means of simple cuttings or slips so you can simply break off lengths of stem and plant them directly into the soil. Its shape, texture and form make it ideally suited for use in pots and containers, whether modern or the more traditional concrete, terracotta or half wine barrels. Use metal pyramids or obelisks in the containers to provide support for the plants to grow inside or against. Being indigenous, A. tenuior is welcomed with open arms in virtually every garden and landscape in South Africa. Certainly this plant is being recognised more and more for its real worth: simplicity, durability, adaptability and compatibility with a wide range of garden styles.