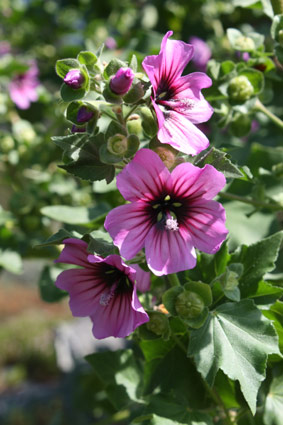 This striking and unusual woody shrub grows up to 2m high with a spread of 1m.
It occurs naturally in colonies on sandy flats and stony hill slopes from central Namaqualand to Hopefield on the Cape west coast. Its sturdy single trunk turns white with age, forms branches halfway up and produces large rounded, palm-like leathery leaves on long spreading stalks. The branch tips produce clusters of large pink to bright magenta flowers, marked with prominent deep magenta lines, in the leaf axils. A. anomala is wind and drought resistant and wellsuited to coastal gardens. It needs full sun and performs well in deep sandy soils, but easily adapts to heavy granitic media. It requires only occasional drenching in winter. After flowering it is important to prune back the branches by about half to promote vigorous new growth, failing which they lose their lower leaves and become leggy. This species is sensitive to frost. It is propagated by seeds sown in autumn or from tip cuttings taken in early summer.