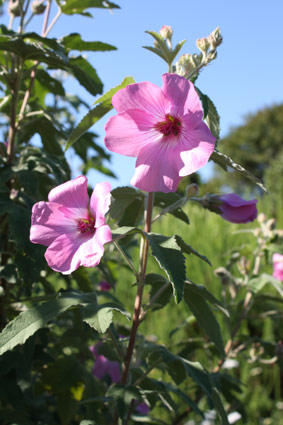 This outstanding garden plant is endemic to rocky mountain slopes of the Drakensberg in the eastern summer rainfall zone of South Africa, at altitudes of between 1200m and 2300m.
It is a sparsely branched, erect, fast-growing shrub of up to 2m, and produces two to three beautiful pink or purple blooms borne on long stalks in the axils of large, deeply lobed, greyish-green, maple-like leaves. The new leaf growth is covered with short velvety hairs and the stems are densely hairy towards the base. In the wild it flowers from February to March, but in cultivation it has a much longer flowering season, beginning in early October, with a peak in January and February. The plant forms a more pleasing shape in cultivation than in the wild. It is an excellent choice as a backdrop to the herbaceous border, as an informal hedge or as a fast-growing screening plant for new gardens. It performs best in full sun but can take afternoon shade. It adapts to most soil types and performs especially well in acid, well-drained granitic media. Although native to the summer rainfall area it does especially well in the winter rainfall zone and requires only occasional drenching in summer. It can take moderate frost. Left to their own devices, the bushes become straggly after a year or two, but vigorous new growth is encouraged by pruning back the branches by about one third in early autumn. Propagation is from seed sown in spring and cuttings taken in early summer.