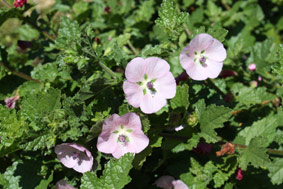 The Pink mallow has a very wide, mainly coastal, distribution from Saldanha on the Cape west coast to the Cape Peninsula and east to southern KwaZulu-Natal, and inland to the western Karoo.
It forms a dense, sprawling groundcover or small shrub of 0.3 to 1.8m high, with a spread of up to 2m producing one to several light- to deep-pink flowers on slender stalks produced in the leaf axils. The three-lobed leaves have a rough upper surface, are covered with short sticky hairs and are aromatic when bruised. Its main flowering period extends from early August to mid-December but occasional blooms may appear throughout the year. In the wild it inhabits sandy flats but easily adapts to heavy granitic soils in cultivation. It is an excellent waterwise subject for windy seaside gardens in full sun, and is useful as a groundcover to stabilise steep banks, for traffic island and office block plantings, as a small shrub for large rock gardens or placed towards the centre of wide herbaceous borders. Its dense, evergreen foliage lends itself to clipping and the species can be used in topiary. Certain erect forms of this species are ideal candidates for training as specimen standards for deep containers. Coastal forms are sensitive to frost, but those from inland areas are frost hardy. Propagation is by seed sown in autumn or from cuttings taken in early summer.