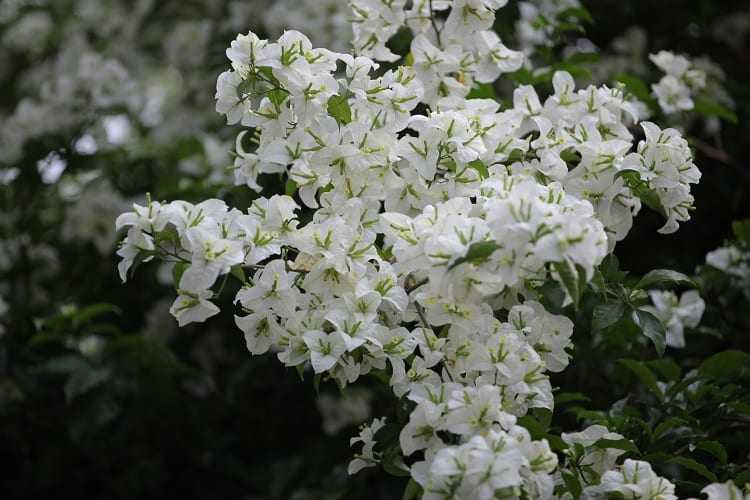 White-flowering plants always make a bold statement in a landscape. When they grow large and produce an abundance of blooms for extended periods of time, they are remembered and seldom forgotten. One such plant is Bougainvillea ‘Jennifer Fernie’, which is always a spectacular sight whilst in full bloom. It’s literally smothered with small cream flowers, encased in white bracts (modified leaves), during the heat and humidity of summer and early autumn. This white-bracted bougainvillea is most likely a hybrid or selection of B. glabra, a vigorous-growing, shrubby climber with magenta bracts, originating in South America. The leaves are shiny and slightly smaller, and more slender, than most other bougainvilleas. It’s blooming season is also later than the majority of these plants cultivated locally, making it an integral part of the summer garden scene. It grows into a shrub or rank climber, with an upright growth habit, attaining a height of some 5 m. The flowers maintain their white colour until early autumn and then turn brown before dropping.

Many other ‘white-bracted’ bougainvilleas have a pink, mauve or brown hue about them, whilst this one has a distinct greenish tinge. Small thorns are found along the length of the stems and branches. It is often damaged by severe winter cold. It sometimes takes a relatively long time to recover from serious frost damage, so perhaps should not be planted in these marginal climates. Essentially, it is a tropical plant that can endure some winter cold.

B. ‘Jennifer Fernie’ is a versatile garden plant that thrives in a sunny position with well-drained soil. It’s a good choice for fences and boundary walls, in pots and containers, cascading down banks and over retaining walls. It can even be trained and trimmed over pergolas and arches. Prune back overgrown plants in late winter or early spring. Pinch out the new growth tips to encourage lateral growth and a bushy habit.

A regular monthly application of a general garden fertiliser like 3:1:5 slow release nitrogen, from spring to autumn, enhances growth and performance. This is contrary to popular beliefs that these plants don’t require any supplementary feeding. They do.

This is just one of those few, or unique, garden plants that stand out from all the rest. There is no other white bougainvillea in cultivation locally that is as crisp, clean and impressive as B. ‘Jennifer Fernie’. It remains a much sought-after garden plant, and deservedly so!