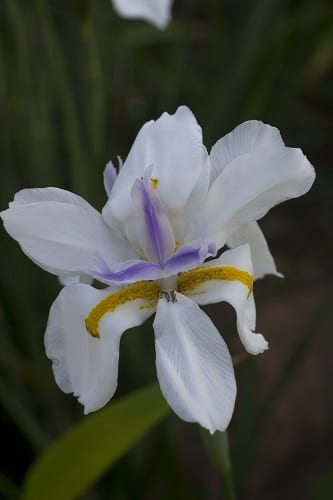 The evergreen genus Dietes belongs to the Iris family (Iridaceae) and comprises six species of which ­five, Dietes bicolor, D. butcheriana, D. ­flavida, D. grandifl­ora and D. iridioides are endemic to sub- Saharan Africa. The sixth member, D. robinsoniana, is restricted to Lord Howe Island, which lies in the Paci­fic Ocean, o‑ the north-eastern coast of Australia. The species occurring in southern Africa grow mainly in the eastern summer rainfall parts of South Africa and in Swaziland. The name Dietes is derived from the Greek ‘dis’ (meaning twice), and ‘etes’ (meaning alliance), a reference to the taxonomic position of the genus between two other closely related members of the family, Moraea and Iris.
The Dietes species, especially D. bicolor and D. grandifl­ora, are very important garden and landscape plants in the temperate parts of South Africa. Flourishing in full sun or light shade, in almost any soil, these versatile plants survive harsh conditions and are able to withstand long periods of drought once fully established, yet they are just as obliging in diffcult, boggy conditions. Easily cultivated and long-lived, their neat, evergreen, spiky leaf fans are complemented by yellow or white Iris-like flowers in spring and summer. The plants seldom fall prey to serious pests and diseases. In general they are sensitive to frost, except for certain forms of D. iridioides and D. grandifl­ora that can take light frost for short periods. All the Dietes species prefer well composted, slightly acid soil with regular watering in summer. With the exception of D. bicolor, their flowers are strongly self fertile, producing copious numbers of seeds from hard, oblong capsules. The irregularly shaped, compressed seeds have a particularly hard seed coat, taking one to four or more years to weather away before germination takes place. The robust D. robinsoniana is hardly ever seen in cultivation in South Africa yet it too makes a handsome garden plant for full sun positions, producing thick clumps of broad, bright green leaves, and white flowers with light orange-yellow nectar guides. Dietes are easily divided by separation of their slender rhizomes.
This is best carried out in early spring, just before active growth begins. Seeds are sown in spring but, as mentioned above, can take a number of years to germinate.

Dietes iridioides is widely distributed from the Riviersonderend Mountains in the southern Cape in an easterly direction to Ethiopia in East Africa and occurs naturally in evergreen forests and along forest margins. It closely resembles D. grandifl­ora but has smaller white flowers with light yellow markings on the outer petals, and is a relatively low growing plant (up to 0.5 m high). It multiplies so rapidly that it can be used as a groundcover in difficult parts of the garden (such as in the poor soil found under evergreen trees), but it performs equally well in lightly shaded or full sun positions. Young plantlets often develop along the ­flower stems, rooting when they touch the ground. It is an excellent subject for stabilizing steep banks, is equally useful as a thick border, and it can even be grown in difficult seaside gardens. Certain forms of D. iridioides can withstand sub-zero temperatures for short periods.